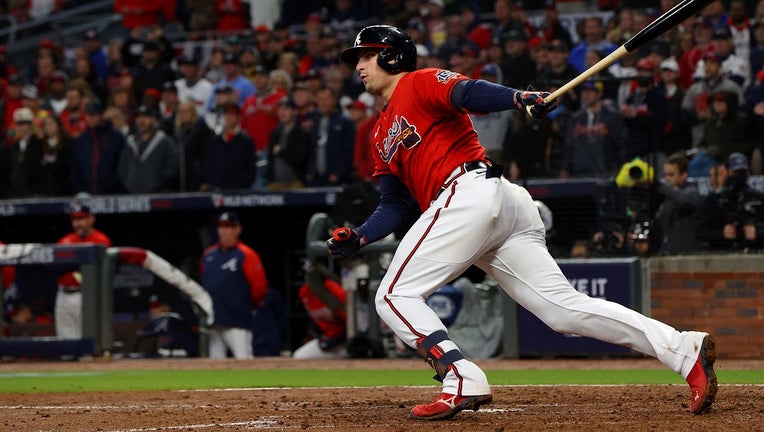 Austin Riley #27 of the Atlanta Braves hits an RBI double against the Houston Astros during the third inning in Game Three of the World Series at Truist Park on October 29, 2021 in Atlanta, Georgia. (Photo by Kevin C. Cox/Getty Images)

ATLANTA - The Atlanta Braves kept the Houston Astro hitless through seven innings of Game Three of the World Series. The Braves beats the Astros 2-1 in their first World Series game at home at Truist Park.

Austin Riley keeps coming up with one clutch hit after another on baseball's biggest stage.

Riley drove in the first run of the Braves' 2-0 victory over the Houston Astros in Game 3 of the World Series on a damp Friday night in Atlanta.

LIVE UPDATES FROM THE GAME

The Braves are now up 2-1 in the series, two wins away from their first championship since 1995.

Their burly third baseman is a huge reason why.

After a breakout year in 2021 that sparks chants of "MVP! MVP! MVP!" from Atlanta fans when he comes to the plate, Riley has carried his regular-season success right to the postseason.

Riley provided the only offense that would be needed on a night when the Braves pitchers did not allow a hit until the eighth inning.

With one out and two runners aboard, Riley yanked one down the third-base line for a double that sent Eddie Rosario scooting home.

Travis d'Arnaud provided some insurance with a mammoth homer over the center-field wall in the eighth, but it's impossible to ignore Riley's impact on the Atlanta lineup. 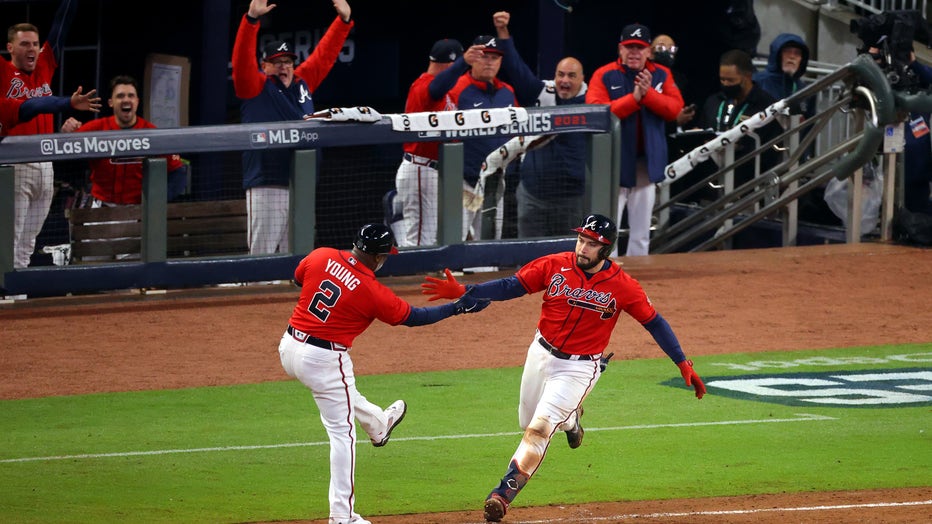 Travis d'Arnaud #16 of the Atlanta Braves is congratulated by Eric Young Sr. #2 after hitting a one run home run against the Houston Astros during the eighth inning in Game Three of the World Series at Truist Park on October 29, 2021 in Atlanta, Geor

During the NL Division Series against the Milwaukee Brewers, Riley went 5 of 15 with a homer to help the Braves advance to face the 106-win Los Angeles Dodgers, the reigning champs and the team that sent Atlanta packing in 2020.

Not with Riley in the middle of things.

He won Game 1 with a walk-off hit in the ninth. In the Game 6 clincher, Riley put the Braves ahead with a two-out RBI double in the first, yet another clutch hit that was overshadowed by Rosario's MVP-winning performance.

Riley is at it again in the World Series.

In Game 1 at Houston, he doubled in a run in the first inning to help spark a 6-2 victory.

On Friday, he jumped on a cutter from rookie Luis Garcia, smoking it just inside the third-base bag -- a huge blow in the first nail-biting game of the Series.

The big hits just keep on coming for the 24-year-old cleanup hitter.

Of the 60 previous times the Series was tied 1-1, the Game 3 winner went on to win 39 times — including six of the last nine.

Rosario walked leading off a 43-pitch half-inning in the third. Freddie Freeman singled and Garcia left an 0-1 cutter over the plate that Riley lined between Bregman and the third-bag, and down the left-field line for an RBI double.

Jorge Soler walked, but Garcia stranded the bases loaded when Adam Duvall fouled to first and d’Arnaud struck out.

The Braves, who stranded nine runners, improved to 6-0 this postseason at Truist Park, which opened in 2017 and where they have won 11 of their last 12 games. The Atlanta stopped a five-game home World Series losing streak.

Houston, the top-hitting team in the majors during the season with a .267 average, was limited to two hits, three walks and two hit batters. 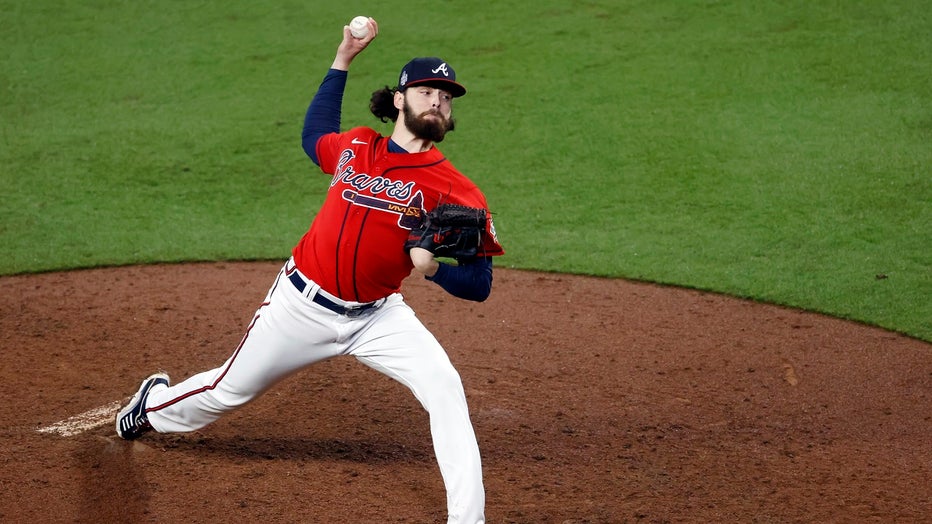 Ian Anderson #36 of the Atlanta Braves delivers the pitch against the Houston Astros during the fifth inning in Game Three of the World Series at Truist Park on October 29, 2021 in Atlanta, Georgia. (Photo by Michael Zarrilli/Getty Images)

Anderson, a 23-year-old right-hander, pitched through spotty control, striking out four and walking three. A.J. Minter and Luke Jackson followed with an inning each.

Díaz’s hit ended the longest no-hit bid in the Series since Game 2 in 1967. Boston ace Jim Lonborg pitched a one-hitter and allowed a two-out double in the eighth to St. Louis’ Julian Javier.

Pinch-runner Jose Siri stole second with two outs in the eighth and went to third when d’Arnaud’s throw skipped into center field for an error, but Siri was stranded when Michael Brantley popped out.

While the Astros’ Dusty Baker (72) and the Braves’ Brian Snitker (66) had the highest combined ages of World Series managers, they lifted their starting pitchers on the timetable triggered by modern metrics — after exactly 18 batters each, not wanting leadoff hitters to face the same pitcher for the third time.

In the Series for the first time since 1999, the Braves won in the Series at home for the time since the sixth and final game of the 1995 World Series against Cleveland.

Anderson had the second-longest no-hit bid by a rookie starter in World Series history behind New York’s Jeff Tesreau in the 1912 opener, broken up when Boston’s Tris Speaker tripled with one out in the sixth.

Anderson walked three, struck out four and hit a batter, throwing just 39 of 76 pitches for strikes.

Garcia gave up three hits in 3 2/3 innings with six strikeouts and four walks, throwing just 72 pitches and coming out after getting the first two outs of the fourth with just two pitches

This was just the eighth matchup of rookie starters in the Series, the first since Detroit’s Justin Verlander and St. Louis’ Anthony Reyes in the 2006 opener. None of the Braves had faced Garcia coming in, and Marwin Gonzalez was the only one to have batted against the Braves’ Ian Anderson (0 for 3).

Zack Greinke was expected to pitch Game 4 for Houston, while the Braves go with the first of consecutive bullpen games in response to losing Game 1 starter Charlie Morton to a broken leg.