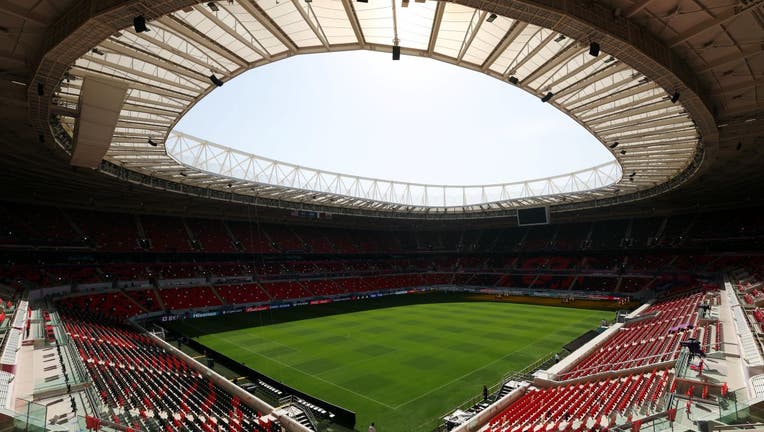 NOVEMBER 17: General view of the pitch at Ahmed bin Ali Stadium ahead of the FIFA World Cup Qatar 2022 on November 17, 2022 in Al Rayyan, Qatar. (Photo by Sarah Stier - FIFA/FIFA via Getty Images)

ST. PAUL, Minn. (FOX 9) - The 2022 FIFA World Cup is set to kick off on FOX on November 20. FOX Sports will air all 64 World Cup matches live across FOX and FS1, with every match livestreaming on the FOX Sports App. While games could be watched at home, we've put together a list of places in the Twin Cities where fans can watch the United States Men's National Team and other teams play.

RELATED: How to watch the World Cup in Minnesota

The Minnesota United (MNUFC) will be hosting World Cup watch parties at Allianz Field in St. Paul, and FOX 9 will also have a streaming show at noon for each watch party.

Fans can go to Allianz Field to cheer on the U.S. Men's National Team as they begin World Cup play in Qatar. Watch parties are being hosted for all three of the USMNT's group stage games at the Brew Hall at Allianz Field, with doors opening at 11:30 a.m. ahead of the 1 p.m. kickoffs.

The watch parties will be held on the following days:

Ahead of 1 p.m. kickoff – at noon – FOX 9 will join MNUFC on a livestreaming show to talk all things soccer and preview the World Cup. You can watch it streaming here, in the player above and on FOX 9's YouTube channel.

The Minnesota United also plans to host watch parties for the Round of 16, quarterfinal, semifinal and final matches.

Other World Cup watch parties in the Twin Cities

The Black Hart, 1415 University Avenue West, will show every match of the 2022 World Cup, including the 4 a.m. matches. The bar is selling $15 World Cup Passports, which gets you discounts. Every game you watch at the bar earns you a stamp in your passport. At the end of the tournament, you can submit your passport to win big prizes.

The popular Minneapolis bar at 1110 Nicollet Mall will be hosting watch parties throughout the 2022 FIFA World Cup. The bar will be selling $10 tickets for "guaranteed admission" for some of the big games, while other games will be first-come, first-serve. Tickets are required for November 25 and November 29. More information and tickets here.

The Latinx brewery, 241 Fremont Avenue North, will host the most anticipated matches. And there's free WiFi so remote workers can enjoy the games while keeping tabs on work. Here's the schedule.

Located at 609 Hennepin Ave., the bar offers a 360-degree viewing experience for all the World Cup games, with the bar calling itself World Soccer HQ in Minneapolis. Here's the schedule.

The brewery, 225 Thomas Ave. N, is extending its taproom hours to show "as many games as possible," with complimentary snacks and beer specials. The taproom will open 15 minutes prior to the start of the 1 p.m. games, and plans to open early for the 9 a.m. games during the quarterfinals and finals. Here's the schedule.

Is your establishment hosting a World Cup watch party? We'll add it to the list. Email melissa.turtinen@fox.com with details.