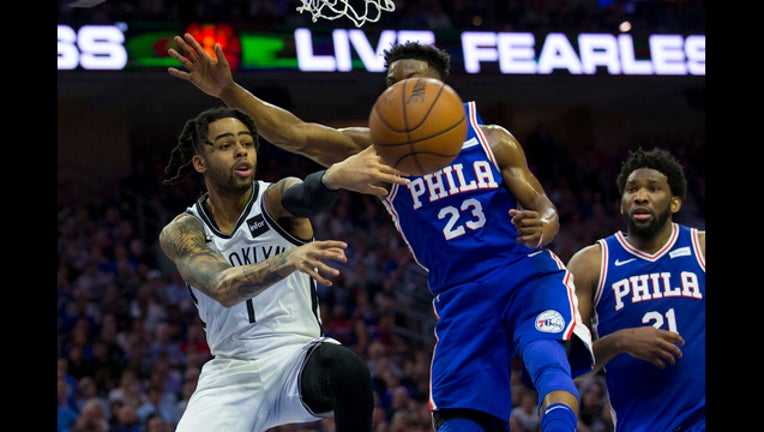 D'Angelo Russell #1 of the Brooklyn Nets passes the ball against Jimmy Butler #23 of the Philadelphia 76ers in Game Five of Round One of the 2019 NBA Playoffs at the Wells Fargo Center on April 23, 2019. (Photo by Mitchell Leff/Getty Images)

MINNEAPOLIS (FOX 9) - Gersson Rosas is looking to make his first major splash in NBA free agency as the new leader of the Timberwolves’ front office.

It hasn’t happened, at least not yet. The Timberwolves appeared to be the front-runner for emerging star guard D’Angelo Russell, who is entering his fifth NBA season. He was drafted by the L.A. Lakers and spent the last two seasons with the Brooklyn Nets.

Russell is close friends with Timberwolves star center Karl-Anthony Towns, and even reportedly took a helicopter trip over L.A. on Sunday while meeting with Timberwolves executives. But reports emerged late Sunday night that Russell was heading to the Golden State Warriors via a sign-and-trade.

He seemed to be a great fit for coming to the Timberwolves. In addition to being close to Towns, Russell averaged 25.2 points per game last season and shot nearly 37 percent from three-point range. The Wolves are looking to add a ball-handler who can score and shoot from the perimeter.

But it appears Russell will play for the Warriors, who lost Kevin Durant to the Nets in free agency on Sunday. Russell will join a backcourt that includes Steph Curry, one of the most dynamic players in the NBA, and Klay Thompson, who has reached an agreement to stay with the Warriors on a 5-year, $190 million max contract.

The Wolves also have to figure if they’ll bring back restricted free agent guard Tyus Jones.