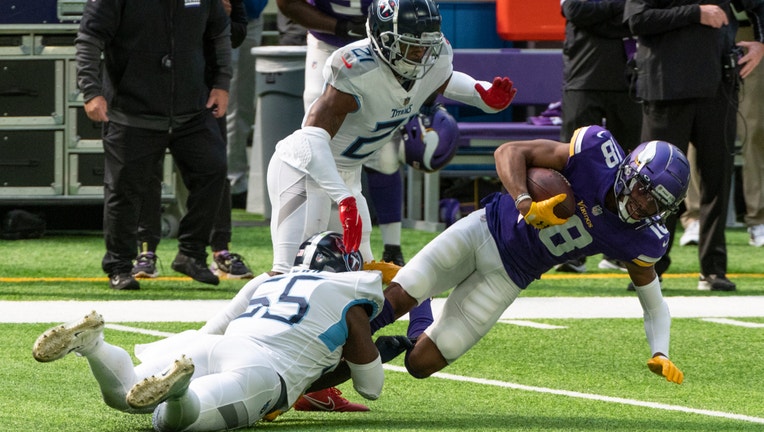 Justin Jefferson #18 of the Minnesota Vikings catches the ball in the first quarter against the Tennessee Titans at U.S. Bank Stadium on September 27, 2020 in Minneapolis, Minnesota. ((Photo by Stephen Maturen/Getty Images))

MINNEAPOLIS - The Minnesota Vikings and Tennessee Titans are shutting down their team facilities after eight members of the Titans tested positive for COVID-19 following Sunday’s game at U.S. Bank Stadium.

NFL offiicials say the Titans learned Tuesday morning three players and five team personnel had tested positive for COVID-19. The NFL is working closely with the NFL Players' Association on the situation, and released a statement Tuesday morning.

Vikings close their facility after COVID-19 tests reported in Tennessee

The Minnesota Vikings and Tennessee Titans are shutting down their team facilities after eight members of the Titans tested positive for COVID-19 following Sunday’s game at U.S. Bank Stadium.

"On Tuesday morning, the Titans COVID testing results returned three new player positives and five new personnel positives. The Titans will suspend in-person club activities starting today. Likewise, the Vikings, who played the Titans on Sunday, will also suspend in-person club activities. Both clubs are working closely with the NFL and the NFLPA, including our infectious disease experts, to evaluate close contacts, perform additional testing and monitor developments. All decisions will be made with health and safety as our primary consideration. We will continue to share updates as more information becomes available."

The Minnesota Vikings, along with the Titans, have closed facilities after 8 positive COVID-19 tests.

Vikings have no positive tests

The Vikings confirmed Tuesday morning they have not had any positive COVID-19 tests since Sunday's game. But out of precaution, TCO Performance Center is closed until further notice and all in-person activitiies for both teams are suspended.

"Today the NFL notified us that members of the Tennessee Titans organization have tested positive for COVID-19," the team said. "As of this morning, we have not received any positive results from Vikings testing following Sunday’s game. Per the NFL protocol, we will suspend in-person club activities and close TCO Performance Center immediately. We will work closely with the NFL and NFLPA to monitor the situation, perform additional testing and determine when the facility can reopen. We will provide further updates regarding this week’s football schedule when appropriate."

Tuesdays are a standard day off for the Vikings. Players and team officials showed up to the practice facility Tuesday and did their standard testing before being told to leave TCO Performance Center until futher notice. They won't be back at the practice facility, at the earliest, until all the team's COVID-19 tests come back.

Back before the start of training camp, as many as eight Vikings players were placed on the reserve/COVID-19 list after either testing positive or coming in close contact with a carrier. Head trainer and Infection Control Officer Eric Sugarman and his family also tested positive. Any players and/or staff that tested positive have since recovered, and the Vikings have not had any positive tests since the regular season started.