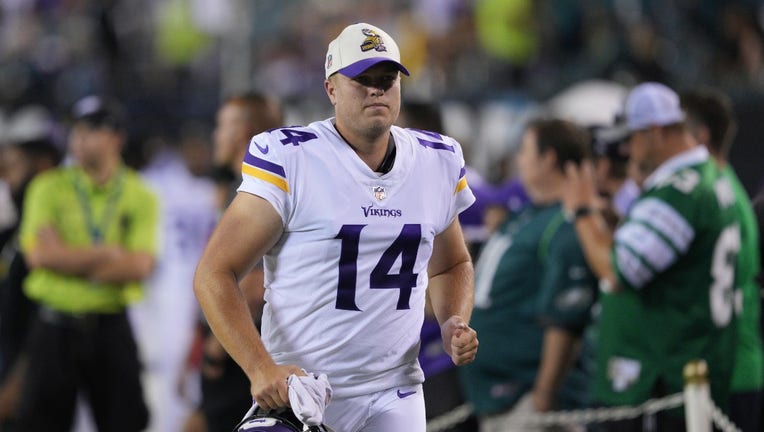 MINNEAPOLIS - Ryan Wright joked on Monday that he had to put his cell phone on "Do Not Disturb" after the Minnesota Vikings beat the New Orleans Saints 28-25 in London.

His phone was lit up with messages and phone calls, which can be rare for an NFL punter. But with two minutes left in the third quarter, the Vikings leading 16-14 and facing a 4th-and-2 near midfield, Wright got the call for a fake punt.

The former 3-star high school quarterback delivered a dart to wide open Jalen Nailor for 13 yards and a first down. It was Wright’s first career completion, and Nailor’s first catch as a rookie. That drive ended with a Greg Joseph field goal.

"We had been working on that play all week. I probably got in 100 throws with Jalen and it was a good designed play. We knew it was going to be wide open and definitely really fun to throw the ball," Wright said Monday. "A trip down memory lane."

Wright added, "Me and Jalen are great friends, we both have the same agent so it’s been a good connection for a while now. It’s my first completion, his first reception and what a time to do it in London."

Wright knew he had a better future as a punter when he didn’t have any scholarship offers, other than NAIA and Division II, to pursue playing quarterback in college. He was the No. 47-ranked pro style quarterback in the country in high school.

The Vikings took a bit of a gamble on Wright, an undrafted rookie out of Tulane, deciding that he beat out veteran Jordan Berry for the punting and holding job in the offseason.

"All Ryan Wright has done this whole season is perform. Obviously a critical decision right there for me. Matt Daniels has done a great job putting something like that in front of me to make that decision when I felt the time was right. Wanted to rely on them, the execution there was great. Huge play executed, really proud of Ryan," Vikings coach Kevin "O’Connell said. "He’s answered the call every single time since he’s become our punter. He should have a lot of confidence moving forward."

Wright has had 16 punts for the Vikings through four games, and is averaging 47.5 yards per punt. He’s also the holder for Joseph on kicks. So far, Joseph is 8-of-9 on extra points and 8-of-10 on field goals. Joseph, despite missing an extra point Sunday, was a perfect 5-of-5 on field goals against the Saints, including the go-ahead 47-yarder with 24 seconds to play.

Wright said the specialists take pride in what they do, especially when it helps lead to wins.

"It’s the third phase of the game, and as you can see with the win, special teams was a huge factor in that. Greg had a great game. We take pride, it’s very important. It’s the other third of the game," Wright said.