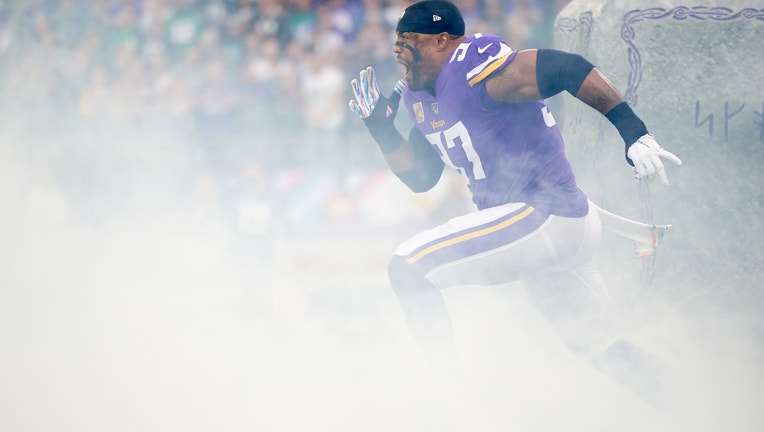 Everson Griffen #97 of the Minnesota Vikings runs onto the field before the game against the Philadelphia Eagles at U.S. Bank Stadium on October 13, 2019 in Minneapolis, Minnesota. The Vikings defeated the Eagles 38-20. (Hannah Foslien / Getty Images)

MINNEAPOLIS - It turns out Everson Griffen’s absence from the Minnesota Vikings 53-man roster on Tuesday was a procedural move after all.

The Vikings, in a bit of a surprise move, waived Griffen and long snapper Andrew DePaola as they trimmed their roster to an initial 53 players. Mike Zimmer made it very clear on Wednesday that the 53-man roster heading into next week before facing Cincinnati is still "a very fluid situation."

Less than 24 hours after being waived, both Griffen and DePaola were back with the team. They were re-signed after the Vikings placed Irv Smith Jr., Kene Nwangwu and Dan Chisena on injured reserve. If all three were put on IR on Tuesday, they would all miss the entire 2021 season.

Smith had surgery Wednesday morning to repair a meniscus injury, with the expected recovery time taking four to five months, which means his 2021 season is over. Nwangwu suffered a knee injury in the first preseason game and hasn’t played since. Being placed on IR on Wednesday means he can return after three games.

Griffen signed with the Vikings last week after coming into workout as a free agent. He spent his first 10 seasons in Minnesota, before splitting 2020 between the Dallas Cowboys and Detroit Lions, finishing the season with six sacks. Griffen had a sack in last Friday’s preseason finale at Kansas City.

DePaola is back and will resume long-snapping duties on special teams.