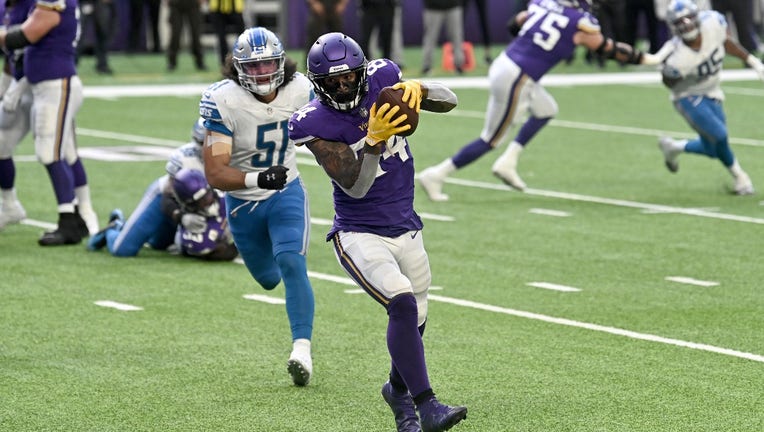 Irv Smith Jr. #84 of the Minnesota Vikings catches the ball in front of Jahlani Tavai #51 of the Detroit Lions to score a touchdown in the third quarter at U.S. Bank Stadium on November 08, 2020 in Minneapolis, Minnesota.  ((Photo by Stephen Maturen/Getty Images))

MINNEAPOLIS - The Minnesota Vikings have been dealing with injuries to key players throughout training camp, but they were officially handed their first major blow of the 2021 season Wednesday morning.

Tight end Irv Smith Jr. had knee surgery to repair his meniscus, and according to ESPN’s Adam Schefter, his recovery time is expected to take four to five months. That means Smith’s 2021 season is likely over before he ever got the chance to take a regular season snap.

Vikings players and coaches react on Wednesday after tight end Irv Smith Jr. has been placed on the injured reserve, ending his 2021 season before it could begin.

Smith played about 10 snaps in last Friday’s preseason finale at Kansas City, when the injury happened. It’s not clear on what play he actually got hurt, and was in good spirits giving a TV sideline interview during the game.

For the second straight year, a major contributor for the Vikings is likely done for the year. Last year, Danielle Hunter had to have season-ending neck surgery after getting hurt early in training camp.

"Irv might have played 10 plays maybe in the game. I’m not exactly sure, but for that to happen in 10 plays, for Hunter to have it happen on the first time he touched anybody last year, it is what it is," Vikings coach Mike Zimmer said before practice Wednesday. "It’s like anybody who is a good player, you hate to see them get hurt. You know that he could’ve helped us a lot."

While having the surgery means the Vikings likely won't have Smith at all in 2021, it was done to preserve his long-term NFL career.

"Irv is a good player. They repaired the meniscus, which is the best thing for him for his longevity. If he would’ve took the meniscus out, from what I understand, he would’ve had an arthritic knee. His career would’ve been shortened. He was doing a lot of nice things for us that would’ve helped us a lot offensively."

Smith was on pace to have a breakout year for the Vikings’ offense. The 2019 second round pick out of Alabama was set to be the No. 1 tight end after Kyle Rudolph was released in the offseason. In 13 games and seven starts last year, Smith had 30 catches for 365 yards and five touchdowns.

In 29 career games and 14 starts, Smith has 676 receiving yards and 12 touchdowns. He had a pair of two touchdown games last season, against the Detroit Lions and New Orleans Saints. He’s also made strides in run blocking for the Vikings. Now, his 2021 season is likely over.

"Tough to lose Irv, tremendous player who has been having a great preseason and offseason, and has done everything right. That’s just one of the tough breaks in this game," Vikings quarterback Kirk Cousins said. "But he’s so young, he’s got a lot of good football ahead of him so this is just going to be a bump in the road in the long scheme of things."

Cousins added, "He’s just a great football player. No reason to think he wasn’t going to have a great year, but he’s got a lot of good football ahead of him. I would expect, whenever he’s back, the same great player that he was last year and was this August.

In an effort to replace his production, the Vikings traded a fourth round pick to the New York Jets on Tuesday for tight end Chris Herndon. Tyler Conklin will likely be the Week 1 starting tight end at Cincinnati, with help from Herndon and more depth from Brandon Dillon.

Herndon was a fourth round pick by the Jets in 2018, and played in 33 games, with 25 starts over three seasons. In that time, he had 71 catches for 796 yards and seven touchdowns. He started 12 games as a rookie, and his 502 receiving yards in his first season trailed only Mark Andrews of the Baltimore Ravens.

"He was kind of a guy that was pretty good in most areas. Of all the tight ends we looked at, he was the one that we thought was the best option," Zimmer said.

Much like they did near the end of training camp, Mike Zimmer had the Vikings scrimmage on Wednesday at TCO Performance Center to test their conditioning and in-game execution. They were without seven players for the workout, including Anthony Barr, Christian Darrisaw, Kene Nwangwu and Alexander Mattison.

Barr hasn’t practiced since Aug. 5 due to an undisclosed injury, but Zimmer sounded optimistic last week that he won’t be out much longer. Darrisaw has yet to practice in camp, and Nwangwu got injured in the first preseason game. Alexander Mattison and Josh Mettellus didn’t practice, and Herndon is not yet in the Twin Cities after Tuesday’s trade.