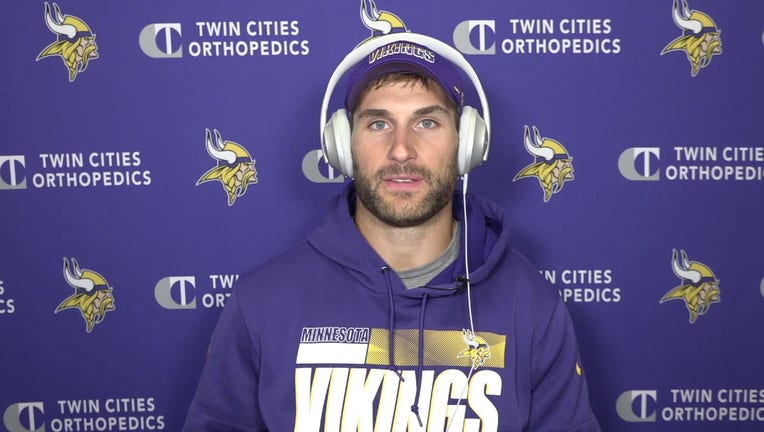 Vikings quarterback Kirk Cousins talked Wednesday about facing the Seahawks, trusting in Justin Jefferson and playing in the NFL amid COVID-19.

MINNEAPOLIS - The Minnesota Vikings have a big opportunity under the bright lights of primetime, hitting the road to face the Seattle Seahawks on Sunday Night Football.

They’re coming off their first win of the season, and can get back into the NFC Playoff conversation with a key road win at CenturyLink Field. We all know the track record for Kirk Cousins in primetime. He’s 0-9 as a starter on Monday Night Football. He did lead the Vikings to a Sunday night win at Dallas last season. But he hasn’t beaten the Seahawks the last two seasons, nor has Mike Zimmer since he came to Minnesota in 2014.

Cousins held his weekly session with reporters on Wednesday. Here are a few takeaways.

After getting their first win of the season, the Minnesota Vikings are hoping to extend their streak with a match the Seattle Seahawks this weekend.

Playing at CenturyLink Field without fans

It will be an entirely different atmosphere than what Cousins is used to when he takes the field in Seattle Sunday night. Normally one of the loudest stadiums in the NFL, there won’t be any fans in the stands due to the COVID-19 pandemic. He’s used to calling out plays at the top of his lungs with the crowd noise. He noted Wednesday he needs to be quieter on the road, not tipping his hand to the defense on what the play might be, and needs his teammates to stand closely together in the huddle as a makeshift sound wall. Crowd noise won’t be an issue, but the Seahawks’ defense remains a challenge.

“We still have to contend with a really good team, really good defense, well-coached group and it will be a great challenge for us,” Cousins said.

It’s only taken two games for Justin Jefferson to show why he was the No. 21 overall pick, and why Kirk Cousins can trust him as a No. 2 receiver to Adam Thielen. In four games and just two starts, Jefferson has 21 catches and leads rookie receivers with 348 yards, which also ranks eighth in the NFL. Jefferson is tied with Stefon Diggs for the NFL lead in catches of over 20 yards with eight.

Jefferson had six catches for 104 yards in one half against the Titans, finishing with seven for 175 yards, and a 71-yard touchdown. Last week, he had four catches for 103 yards, including an impressive catch on a back shoulder throw. He’s averaging 21.8 yards per catch through four games, and he said after Sunday’s win he’s just getting started.

“He’s making plays, creating separation, finishing plays. It’ll be an exciting challenge every week to try to find new opportunities to get him the football,” Cousins said.

A different NFL life amid COVID-19

Kirk Cousins provided some insight Wednesday on how NFL live has changed for players amid the COVID-19 pandemic. Last week, after a Tennessee Titans’ outbreak following playing the Vikings, forcing the closure of TCO Performance Center for two days as well as multiple daily COVID tests for players and staff. The team flew to Houston Saturday, and instead of a group bible study that night, they held a virtual session with Tony Dungy with players in their hotel rooms. At the team breakfast Sunday morning, players sat four to a table instead of a normal six to eight.

“It’s just a little different wrinkle to throw into your routine and it starts to become a new normal after you’ve done it for a few weeks. There’s plenty of sacrifices we’re happy to make as long as it ensures we can have a football season and play these games,” Cousins said.

What would a win Sunday mean?

Mike Zimmer is 0-4 against the Seahawks as the Vikings’ head coach. Kirk Cousins is 0-2 against Seattle as the Vikings’ starting quarterback. They have a chance to go on the road, improve to 2-3 and give themselves a chance to get back to .500 before going on their bye week. Cousins has a Sunday Night Football win, and won his first road playoff game as a starter last year. A win Sunday at Seattle would do wonders in setting a tone for the rest of the season, and making a push for the playoffs. As Cousins said earlier this season, you’re only guaranteed 16 opportunities. You have to earn the rest.

“It’s a great opportunity. Any time you can go on the road and play a really good football team, you have a great opportunity to do something special and get our season continuing on the right track. We look forward to that,” Cousins said.