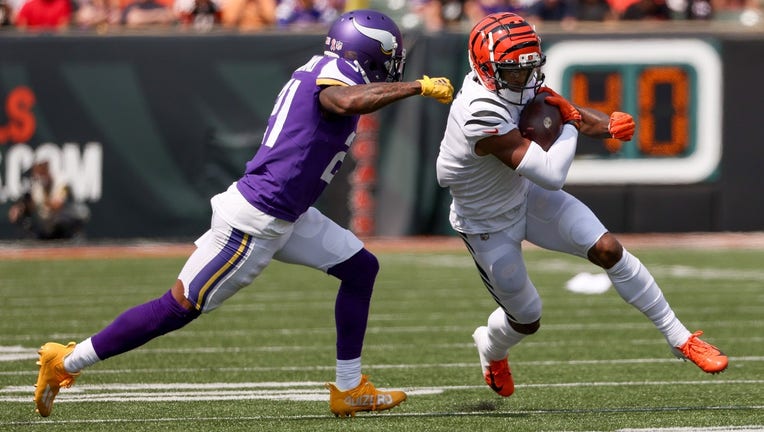 Ja'Marr Chase #1 of the Cincinnati Bengals runs with the ball while being chased by Bashaud Breeland #21 of the Minnesota Vikings in the second quarter at Paul Brown Stadium on September 12, 2021 in Cincinnati, Ohio.  ((Photo by Dylan Buell/Getty Images))

MINNEAPOLIS - Bashaud Breeland and the Minnesota Vikings are moving on from Sunday’s season-opening 27-24 overtime loss at Cincinnati, but not without some lessons learned.

Breeland was one of a few players on Wednesday to take responsibility for key plays that went wrong in the loss to the Bengals. Breeland had a pair of big ones, being called for pass interference on a drive that led to a touchdown, then giving up a long touchdown before the end of the first half.

The Minnesota Vikings have watched the tape from a season-opening 27-24 loss in overtime at the Cincinnati Bengals, and have no choice to move on as preparation starts for the Arizona Cardinals.

Breeland made seven tackles and had a tackle for loss in his Vikings’ debut, but would like to have those two plays back.

"The mental errors. Take away the mental errors, it’s a different ballgame. Ain’t no reason I can’t sit here and say we shouldn’t be 1-0 right now. Those two mistakes that I made really cost us, put us in a hole," Breeland said.

He came to the Vikings in free agency after spending four seasons in Washington, one in Green Bay and the last two with the Kansas City Chiefs. Breeland was part of the plan for Mike Zimmer and staff to revamp the defense.

"I was playing for the back shoulder. That’s what that team normally do, back shoulder in that time so that’s what I played for. I was looking back for the ball at the same time in that position. I flipped over once I saw the ball go over my head, trying to get it," Breeland said. "I didn’t feel like it was pass interference, but I made it close enough for the ref to make that call. What we can’t do is let that affect the plays that’s coming."

The Bengals got the ball back with 1L11 to go in the half, and got the ball to midfield with 35 seconds left. Burrow hit Ja’Marr Chase in stride for a 50-yard touchdown past Breeland. A blitz was called on the play, and Breeland said he got caught looking at Burrow too long, allowing Chase to run by him.

"I was trying not to get out too fast and then when I did get out, I kept my eyes on the quarterback too long. I actually watched him throw the ball and release his hands before I really got going. Everything messed me up during that time," Breeland said.

Zimmer said Monday it was a bad defensive call on his part, and one of a few he’d like to have back.

"I tried to blitz them in the two-minute drill, and he stared at the quarterback too long. Other than that, he did some really good things," Zimmer said.

The Bengals went after Breeland frequently, and he allowed five catches for over 100 yards and a touchdown. Life doesn’t get any easier for the Vikings’ defense as they travel to Arizona, where they’re tasked with containing Kyler Murray, Chase Edmonds and DeAndre Hopkins among others.

Murray threw for 289 yards and had four passing touchdowns, two apiece to Hopkins and Christian Kirk.

"It’s going to be a test for us, but that’s how we want it. Show that we’re not what we showed last week," Breeland said.