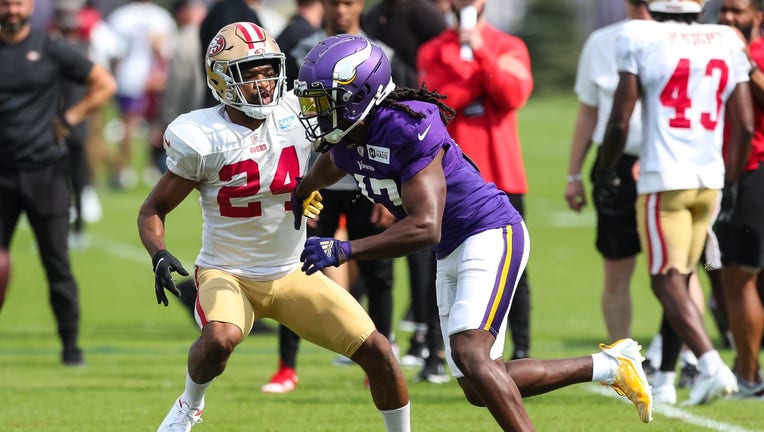 K.J. Osborn #17 of the Minnesota Vikings and Ka'dar Hollman #24 of the San Francisco 49ers compete in a drill during a joint practice at training camp at TCO Performance Center on August 18, 2022 in Eagan, Minnesota.  ((Photo by David Berding/Getty Images))

MINNEAPOLIS - Kevin O’Connell and Kyle Shanahan agreed to one simple rule as the Minnesota Vikings and San Francisco 49ers came together this week for joint practices at TCO Performance Center: No fighting allowed.

O’Connell addressed it with Vikings’ players multiple times throughout the offseason, as did Shanahan with the 49ers. After months of practicing against your own teammates, you never know what can happen when going against an opponent for the first time. Case in point – the New England Patriots and Carolina Panthers – which had brawls twice this week.

The Vikings hosted the 49ers for joint practices Wednesday and Thursday at TCO Performance Center.

Shanahan and O’Connell had one rule for everybody Wednesday and Thursday in Eagan: You throw a punch, you’re kicked out of practice for the day.

"These two days are going to such a big part of how we plan the entire training camp. If you miss a chunk of yesterday’s practice or today’s practice, we’re wasting our time out here," O’Connell told reporters before Thursday’s workout.

"We know how important this practice work is right now. That’s what we stressed," Shanahan said.

That doesn’t mean things didn’t get heated in certain moments. Kirk Cousins, after completing a pass over the middle to Adam Thielen, looked back at his teammates and yelled, "You f*****g like that?!"

During a punt coverage drill Wednesday, Nate Hairston got shoved to the ground by a pair of 49ers’ players. He got in their face, and there was jawing from both sides all the way to the sideline. But no punches thrown.

Thursday, Thielen took exception to 49ers’ players tackling Vikings’ running backs to the ground. He had to be restrained by teammates. Defenders are urged to hit, but let offensive players go without a full tackle in practice.

There was plenty of trash talk over the two days, but no fights. Tight end George Kittle said with the fact that starters likely won’t play much, if at all Saturday, the joint practices served as the time to get the work in.

"You didn’t see a guy going out of their way to hit someone or start a fight or something like that," 49ers tight end George Kittle said. "Honestly, I think these practices are more important than the game. You have a chance here to show out in front of a lot of people. This is huge for everyone."

O’Connell was pleased with how the two days went.

"Everything I hoped it would be. You know it’s going to be really good work, you know both teams are going to do things the right way, I give Kyle and his staff a ton of credit," O’Connell said. "There was a couple touchy moments there, but never ever to the point where anything got to be a distraction. It was just good football."

After making his preseason debut at the Las Vegas Raiders, rookie Ed Ingram found himself with the first-time offensive line at right guard in Wednesday’s practice. In fact, he got every snap while Jesse Davis worked mostly with the second team.

Throughout the offseason, Davis had gotten most of the first-team reps until recently, with Ingram getting in the mix. Ingram will likely get more chances on Saturday in the only preseason game at U.S. Bank Stadium.

The Vikings host the 49ers at 6 p.m. Saturday, a preseason game you can watch on Fox 9.