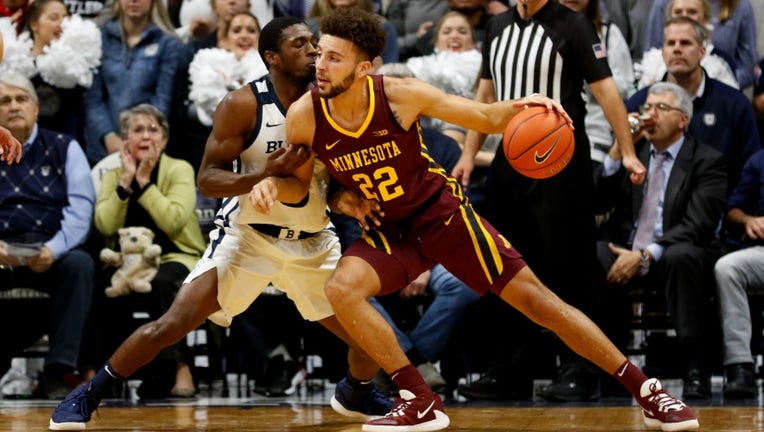 Gabe Kalscheur #22 of the Minnesota Golden Gophers makes a move on Kamar Baldwin #3 of the Butler Bulldogs at Hinkle Fieldhouse on November 12, 2019 in Indianapolis, Indiana.  ((Photo by Justin Casterline/Getty Images))

Lindsay Whalen’s Gophers’ women’s team is in the WNIT after a 14-17 season and will play at UW-Green Bay Thursday night. Despite the Gophers’ teams not being involved in the Big Dance, there are still plenty of Minnesota connections to the tournament.

Here is a look at some of the top locals that are a part of this year’s March Madness.

The No. 1 recruit for 2022 and McDonalds All-American out of Minnehaha Academy is having a standout freshman season at Gonzaga, the No. 1 overall seed in the tournament. He had two games this season with at least 20 points, 15 rebounds and five blocks. If you want to see him play for Gonzaga, you’ll have to watch the NCAA Tournament. He’s a consensus lottery pick in the next NBA Draft.

It’s a little extra salt on an open wound when Minnesota kids are successful at Wisconsin. That’s the case as Maple Grove native Brad Davison, Lakeville’s Tyler Wahl and Eastview’s Stephen Crowl have all had major impacts on the Badgers, who finished in a tie for the Big Ten regular season title. Add to the Ben Carlson, who has battled injuries in two seasons at Wisconsin. The Badgers face Colgate Friday night.

Gabe Kalscheur was one of the surprise departures from the Gophers last season, especially after Johnson was hired. The former DeLaSalle standout starts for Iowa State and is the Cyclones’ third-leading scorer. Iowa State is an 11-seed and faces LSU Friday night.

A former East Ridge star and now a guard at Baylor, Kendall Brown is one of the Bears’ top players this season. He’s averaging 10 points and 4.9 rebounds per game as a freshman. Like Holmgren, Brown is expected to be in the NBA Draft after the tournament’s conclusion. Baylor is a No. 1 seed and faces Norfolk State Thursday afternoon.

The Gophers heavily recruited David Roddy, a former Breck standout who went to Colorado State. As the Mountain West Conference Player of the Year, Roddy averaged more than 19 points per game this season as the Rams are making their first NCAA Tournament appearance since 2013. Roddy also earned All-America honors this year. Colorado State faces Michigan on Thursday.

Race Thompson was a high school standout at Armstrong, and nearly transferred home to the Gophers before this season. Thompson is averaging 11.5 points and 7.6 rebounds per game for the Hoosiers, who are back in the Big Dance for the first time since 2016. His father, Darrell, was a star running back for the Gophers and now does radio analysis for the University of Minnesota football team.

Former Hopkins star Kerwin Walton heavily considered staying home to play for the Gophers two years ago before choosing North Carolina. After an impressive freshman season, Walton’s numbers and playing time have both dropped. He’s averaging 3.6 points and 1.2 rebounds per game this season for the Tar Heels. They play Marquette Thursday afternoon.

The Hopkins star and Gatorade Player of the Year is back after a December knee injury. Paige Bueckers led UConn to the national title game last year before losing. She’s averaging 14.3 points, 4.2 rebounds and 4.5 assists for the Huskies this season. With the NCAA Women’s Final Four at Target Center later this month, they’re might not be a more motivated player that Bueckers to win a national title in her home state.