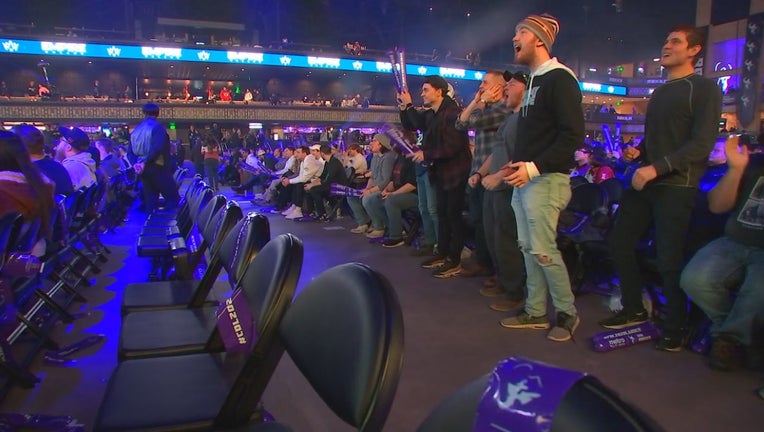 Fans like Scott Weinand and his friends showed up Friday for the kickoff the tournament. (FOX 9)

MINNEAPOLIS (FOX 9) - Twelve teams and 10,000 fans crowded into the Armory in Minneapolis on Friday for the biggest e-sports event ever in the Midwest.

The weekend-long event is a kickoff for the inaugural season for a new "Call of Duty" gaming league. If you thought video games were just for fun, for some it's a job and serious business. But for others, it's a spectacle to watch.

Twelve teams and 10,000 fans crowded into the Armory in Minneapolis on Friday for the biggest e-sports event ever in the Midwest.

"It's a hell of a game," said Scott Weinand. "One of the best games ever invented."

Scott Weinand and a handful of his friends from college came down from Bismarck, North Dakota to answer the call.

"It brings me and my friends together," said Weinand. "Gives us something to do in the evenings. Good relaxation, but it’s not relaxing because we play hella Search and Destroy. It's super lit."

More than 10,000 fans are expected to help launch the inaugural season of the new Call of Duty League. They'll watch 12 teams from cities around the world including Minnesota ROKKR play each other in 5 on 5 matches over the course of three days to see who will dominate in the first-person shooter video game.

"I grew up in Minnesota," said Ashley Glassel, who goes by the gamer tag "MiDNiTE" with the ROKKR. "To have the first event of the league -- the brand new Call of Duty league -- kickoff here in Minneapolis, it means a lot to me. It’s kind of a homer thing."

Just like the NFL or NBA, there are player statistics, analysts and hype videos while teams practice in the game for six or seven hours a day, have coaches and look at game film.

While it may seem strange to some for professional gaming to become a spectator sport, Call of Duty fans say the popularity of e-sports is taking aim at the mainstream.

"Maybe a young kid who looks up to LeBron James," said Glassel. "He can still do that or maybe he looks up to one of the people on that stage right now. 'Like, wow maybe I can do that.'"

But for Weinand and his friends, watching the Call of Duty league is better than being at the Super Bowl.

"I think the general population thinks we're a bunch of nerds, but it's fun as hell and we don't really care," said Weinand.

Fans paid anywhere from $25 to $150 to attend the event and it is sold out. The next league event will be in a couple of weeks.