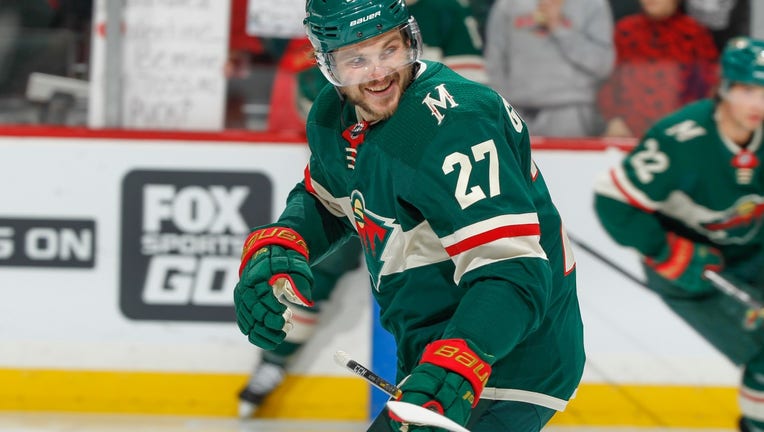 Alex Galchenyuk #27 of the Minnesota Wild warms up prior to the game against the Vegas Golden Knights during the game at the Xcel Energy Center on February 11, 2019 in Saint Paul, Minnesota. ( (Photo by Bruce Kluckhohn/NHLI via Getty Images) )

The two teams are in similar spots as the NHL regular season enters its final stretch. The Rangers, at 60 points, are 12th in the Eastern Conference and eight points out of a playoff spot. Any slip could be costly the rest of the way. The Wild, while equally desperate, are in slightly better shape.

They’re 10th in the Western Conference at 60 points and four points out of the No. 8 spot in the playoffs with 26 regular season games left.

Alex Stalock will get his second straight start in net after recording a 26-save shutout against the Vegas Golden Knights on Tuesday, about 24 hours removed from the Wild trading veteran winger Jason Zucker.

Stalock is 14-8 on the season with a .908 save percentage and 2.74 goals against average. He’s ready to play whenever he’s given the opportunity.

“I think this time of year, you ask any athlete and the first word they will probably say is fun. You’re playing really, really meaningful games and it’s fun to be a part of,” Stalock said.

The NHL trade deadline is still 10 days away and the Wild likely isn’t done making moves. General Manager Bill Guerin said as much after trading Zucker to the Pittsburgh Penguins Monday night. But it’s been a whirlwind few days for Alex Galchenyuk, who came to the Wild from Pittsburgh in the trade.

Galchenyuk had 17 points in 45 games with the Penguins this season, including two goals and four assists on the power play. Last season, he led the Arizona Coyotes on goals, power-play goals with nine and 21 power play points. He has 313 points in 535 career NHL games.

Galchenyuk got 12 minutes, 26 seconds of ice time against the Golden Knights and got one shot on goal. For now, he’s keeping his focus on his time with the Wild.

“A lot happened but it’s been pretty positive. I’m adjusting pretty well and it was easy to just come in here and just play a game. It was quicker to adapt to everything,” Galchenyuk said. “I’m just focused on doing my job the best I can and help the team win.”

Boudreau says for the time being, he envisions Galchenyuk taking what was Zucker’s spot in the lineup.

“All the other lines were pretty well-established, it was an easy fit to start off with. Hopefully we don’t have to make a lot of changes but you never know,” Boudreau said.

It’s a crucial time for the Wild as they try to get back in the playoff hunt. Thursday marks their third straight home game, and Saturday against the San Jose Sharks will be their seventh of eight on home ice. The Wild is 17-8-4 at Xcel Energy Center, one of the better home records in the NHL.

“Every game right now is huge, so those are the games you want to play. You want to be in a position to get in playoff position or try to get there, so it’s exciting. That’s what you play the game for,” Galchenyuk said.