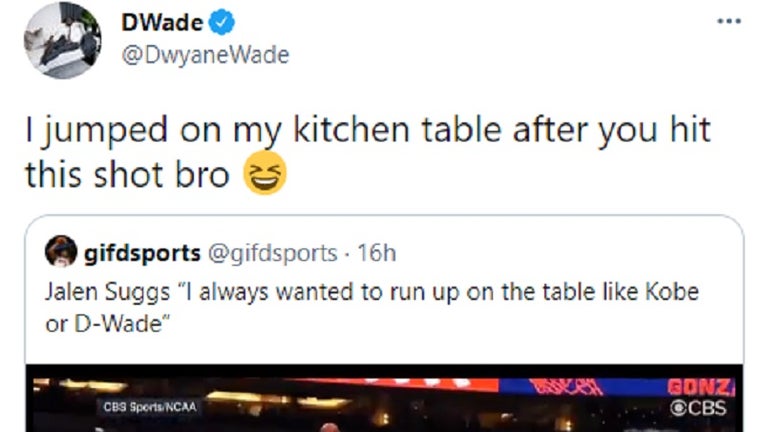 Future NBA Hall of Famer Dwyane was among those showing love for Jalen Suggs after he hit a huge shot to send his team to the NCAA Championship on Saturday. (Twitter)

(FOX 9) - It was a moment made for the movies Saturday night, as St. Paul native and Minnehaha Academy grad Jalen Suggs rose up to put Gonzaga over UCLA in overtime in the NCAA Final Four with a history-making buzzer-beating shot.

Inbounding the balls with just seconds left on the clock in overtime, after UCLA scored a putback basket to tie the game at 90-90, Suggs sprinted down the court, pulled up from the logo, and banked in the biggest shot of his life as the clock hit zero in Indianapolis.

Living up fully to the moment, Suggs dashed from the court and hopped on the scorers' table to celebrate.

The huge shot had the sports world buzzing online, including NBA legend Dwyane Wade, who Suggs referenced in a postgame interview.

"I always wanted to run up on the table, like Kobe or DWade," Suggs told reporters.

"I jumped on my kitchen table after you hit this shot bro," Wade responded on Twitter, while later adding: "Jalen Suggs is built different! WoW!"

But Wade was far from the only basketball legend in awe after the huge shot. Wade's former teammate LeBron James also chimed in.

"I said SUGGS about to hit this as soon as he crossed half court. GAME!!" James tweeted after the big shot.

The Minnesota Vikings joined in on the praise with a simple tweet of a photo of Suggs at U.S. Bank Stadium captioned simply: "Suggs" with a crown emoji. The Twins also posted a photo of Suggs in a Twins shirt as a kid.

The big shot led to others gushing about Suggs' athletic talents beyond basketball, including being a top prospect quarterback out of high school.

Suggs will next step on the floor on Monday night for Gonzaga's championship matchup against Baylor.