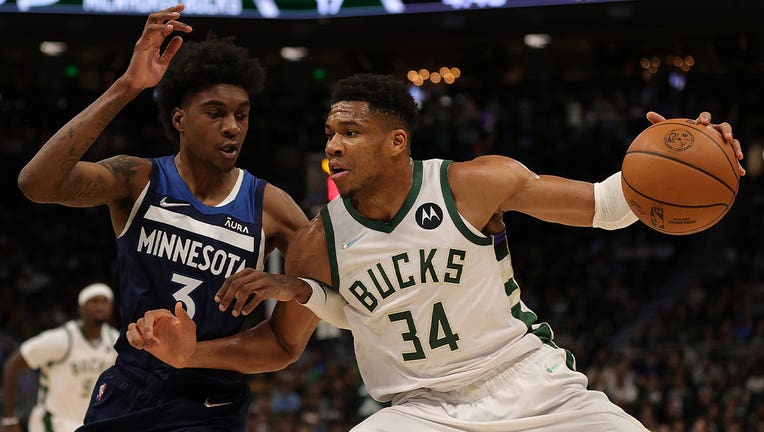 Giannis Antetokounmpo #34 of the Milwaukee Bucks works against Jaden McDaniels #3 of the Minnesota Timberwolves during the first half of a game at Fiserv Forum on October 27, 2021 in Milwaukee, Wisconsin. (Getty Images)

Giannis Antetokounmpo had 40 points and 16 rebounds for the Bucks, who were without point guard Jrue Holiday and center Brook Lopez.

The Bucks, who trailed 94-79 entering the final period, pulled within 110-108 on Antetokounmpo's layup with 9.4 seconds remaining. Edwards answered with two free throws.

Jarred Vanderbilt, making his first start of the season, had 10 points and 13 rebounds for the Timberwolves. Khris Middleton scored 16 points and Grayson Allen had 13 for the Bucks.

Minnesota had lost six straight against the Bucks and hadn't won at Milwaukee since the 2013-14 season.

The Timberwolves never trailed, leading 44-34 after one quarter and 66-58 at the half. Minnesota used a 9-2 run midway through the third quarter to push the lead to 82-69.

Minnesota made 17 of 25 shots in the first quarter, including 6 of 10 from beyond the arc.

Timberwolves: F Jarred Vanderbilt made his first start of the season, replacing Josh Okogie. Vanderbilt had seven rebounds, including four offensive, in 14 minutes in the first half.