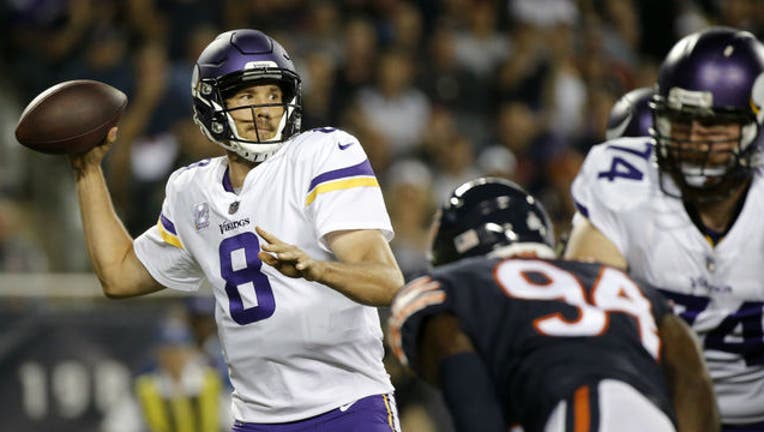 CHICAGO, IL - OCTOBER 09: Quarterback Sam Bradford #8 of the Minnesota Vikings looks to pass the football in the first quarter against the Chicago Bears at Soldier Field on October 9, 2017 in Chicago, Illinois. (Photo by Jon Durr/Getty Images)

The Cardinals will sign Bradford to a one-year deal worth $20 million, including $15 million guaranteed, and an option year at $20 million, according to ESPN's Adam Schefter. NFL Network's Ian Rapoport also says Bradford has committed to the Cardinals.

The Vikings traded for Bradford in 2016 after Teddy Bridgewater tore his ACL during a preseason practice. Bradford opened the 2017 season with a 346-yards, three-touchdown opening win game against the New Orleans Saints, but he aggravated an old knee injury in the 29-19 victory.

Bradford returned to the lineup in Week 5, but re-aggravated his injury during the game. He was officially placed on injured reserve in Week 10.

VIKINGS TO OFFER KIRK COUSINS 3-YEAR DEAL: Kirk Cousins will visit the Minnesota Vikings first in his search for a new team. The Vikings have offered the free agent quarterback a three-year, $86 million deal, according to NFL Network’s Ian Rapoport. According to Rapoport, Cousins will have dinner with Vikings coaches and other personnel Wednesday, night, then visit the team's new facility in Eagan on Thursday.

According to Rapoport, “it is not over…But if the visit goes well, he is likely to sign there.” Schefter reports Cousins intends to sign a three-year, fully guaranteed contract with the Vikings on Thursday.