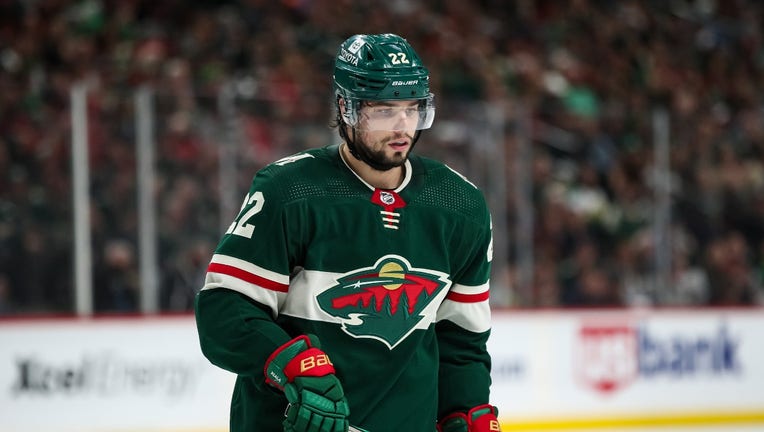 Kevin Fiala #22 of the Minnesota Wild looks on against the St. Louis Blues in the second period in Game Five of the First Round of the 2022 Stanley Cup Playoffs at Xcel Energy Center on May 10, 2022 in St Paul, Minnesota. The Blues defeated the Wild ((Photo by David Berding/Getty Images))

MINNEAPOLIS - Kevin Fiala's days with the Minnesota Wild have come to an end, after four seasons, 215 games and 79 goals from the talented winger.

The Wild announced Wednesday afternoon that they traded the top-line winger to the L.A. Kings for their 2022 first round pick, and the rights to current University of Minnesota defenseman Brock Faber. That means for the second straight year, the Wild will have two first round picks in the NHL Draft.

The Minnesota Wild on Wednesday traded winger Kevin Fiala to the L.A. Kings for a 2022 first round pick, and the rights to current University of Minnesota defenseman Brock Faber.

Wild general manager Bill Guerin told reporters on Wednesday it wasn't an easy decision, but one both sides knew had to happen.

"We’ve been down the road a couple times with Kevin already. He had a great year, and we just were not going to be able to do it. We knew that, they knew that. There’s no sense just trying to screw around and give him a low ball deal. It’s not going to work, we knew we were going to have to move him," Guerin said.

Fiala set career-highs in the 2021-22 season with 33 goals, 52 assists and 85 points. He was one of three 30-goal scorers for the Wild, joining Kirill Kaprizov and Ryan Hartman. He was one of six 20-goal scorers on a team that set a franchise record with 113 regular season points.

Fiala’s 52 assists were third on the team, behind Kaprizov and Mats Zuccarello. But in six playoff games against the St. Louis Blues, Fiala didn’t score a goal and finished with three assists. The Wild had a decision to make, as Fiala was set to make $5.1 million against a tight salary cap, or become a restricted free agent.

"He had 85 points, the kid had a great year and we don’t have cap space. Honestly to keep him we’d have to trade three guys," Guerin said. "It just didn’t fit."

Immediately after the season, Fiala addressed the uncertainty about his future in Minnesota.

"There’s no other answer than we’ll see, I don’t know," Fiala said.

Last offseason, the Wild signed Kaprizov to a five-year deal and made him the highest-paid player in franchise history.

Faber is returning to the Gophers this upcoming season after being named the Big Ten Defensive Player of the Year. He’s a two-time All-Big Ten pick and set career-highs last season with 14 points and 12 assists. On Wednesday, the Gophers named Faber a captain for the 2022-23 season.

"He’s really a high-end prospect, somebody that we think is not far away from playing at all," Guerin said.