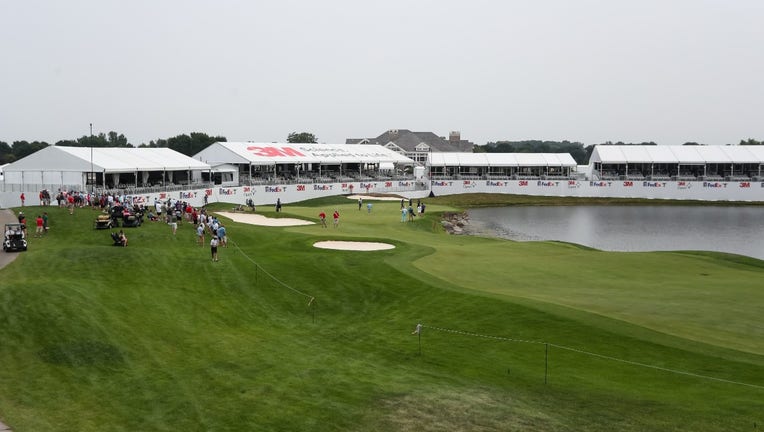 A view of the 18th green as golfers finish their round during the EMC Championship Pro-Am tournament ahead of the 3M Open on July 21, 2021 in Blaine, Minnesota.  ((Photo by David Berding/Getty Images))

MINNEAPOLIS - We’re less than 24 hours away from the third annual 3M Open teeing off at TPC Twin Cities in Blaine, and the 2021 tournament should be as competitive as it’s ever been.

Competitors in the 156-player field arrived to the golf course between Sunday and Monday, some just hours after finishing up The Open Championship across the pond. With previous champions Matthew Wolff and Michael Thompson in the field, first round play starts bright and early Thursday morning. TPC Twin Cities will play as a par-71, with three par-5s playing at just under 600 yards.

TPC Twin Cities is hosting the third annual 3M Open this week in Blaine, and this year's field includes at least 23 of the top 70 players in the world.

This year’s 3M Open features at least 23 of the top 70 players in the field, led by Johnson, No. 2 in the World Golf Rankings. He and Oosthuizen spoke to the media on Wednesday after playing nine holes in the Pro-Am.

DUSTIN JOHNSON BACK AFTER WITHDRAWING IN 2020

Dustin Johnson’s inaugural 3M Open last year was short-lived. He fired a 6-over par 78 in the first round, and withdrew from the tournament shortly after due to a back injury.

"I just wasn’t feeling good, the back was stiff so it was tough for me to swing the way I wanted to," Johnson said. "Obviously I was struggling a little bit so I went home, rested, got worked on, and obviously that’s when I started playing really well after this."

Johnson’s season took off immediately after the 3M Open. He won last year’s FedEx Cup, and won his first Master’s title back in November. He’s back in Blaine this week because he likes the way TPC Twin Cities fits his game.

"3M does a great job of setting up the tournament. They take care of us very well, the golf course is good. Any time you’ve got a golf course like this where the grass is perfect, the greens are good, it’s fun to play," Johnson said.

Louis Oosthuizen, currently No. 9 in the World Golf Rankings, is making his 3M Open debut after having the 54-hole lead in The Open Championship last week at Royal St. George’s. But Oosthuizen shot a 1-over par 71 in the final round, finishing four shots behind winner Collin Morikawa, who fired a 4-under par 66 on Sunday to finish 15-under par.

Oosthuizen talked with fellow pro Charl Schwartzel, a 3M Open veteran, earlier this summer before deciding to come to Minnesota. Oosthuizen said he’d rather get right back out and play, instead of dwell on a disappointing finish in a major.

"It was disappointing. Collin played the way you should play to win a major, especially on a Sunday. He didn’t make any mistakes," Oosthuizen said. "I’m glad I entered this event to get back in there and play. Not really sit at home and think about that."

Oosthuizen arrived to Minnesota at about 2 a.m. Monday, took the rest of the day off and used Tuesday and Wednesday for practice rounds and the 3M Open Pro-Am. In two days, he likes what he sees out of TPC Twin Cities. That’s despite making a bogey 6 on the signature par-5 No. 18 in the Pro-Am on Wednesday.

"Really good golf course. I asked Charl about it, he played last year and I asked him about the golf course. He said it’s one of his favorite weeks," Oosthuizen said.

Oosthuizen also talked about declining to play in next week’s Olympics in Tokyo. He qualified to represent South Africa, but opted to focus on major tournaments, a busy schedule between the PGA and European Tours, playing in the World Golf Championships and getting ready for the FedEx Cup Playoffs.

"It was not an easy decision, I was very keen on going to the Olympics but they didn’t really make it the easiest for us. There was no way of me working with my physio there that week. He couldn’t go, so that made my decision a little bit easier," Oosthuizen said. "At the end of the day, to me four majors and the world events are the events that I grew up playing for and the events that I really want to focus on."

Fan-favorite Rickie Fowler arrived to the Twin Cities very early Monday after finishing The Open Championship with a 5-under 65 Sunday to finish tied for 53rd at 1-over par. He took the rest of the day off, and got a full 18 holes of practice in on Tuesday.

Maybe the fan highlight of the week so far, Fowler played in Wednesday’s Pro-Am with former NBA star and current analyst Charles Barkley.

"We had a great time. No side bets, it was good to see him. He had a handful of good shots, I think he made maybe four pars on the front nine. We had a good time. The 9-hole Pro-Ams are awesome," Fowler said.

Fowler comes to TPC Twin Cities needing a good tournament to put himself in solid ground for the FedEx Cup Playoffs. He’s playing in his first 3M Open, but he was at Hazeltine for the Ryder Cup in 2016 and also played in a U.S. Amateur in Minnesota. He’s looking forward to seeing TPC Twin Cities filled with fans.

"It’s great to be back. Big golf fans up here from being here for the Ryder Cup. Being up this far north, people appreciate the time that they get when they do get to play golf and it’s not below zero. I know it can get a little chilly up here. It’s pretty cool."

First round play starts around 7 a.m. Thursday on the front and back nine at TPC Twin Cities in Blaine.