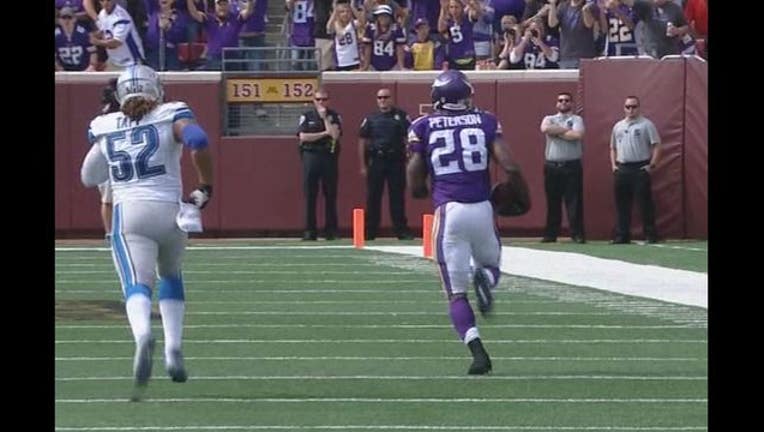 MINNEAPOLIS (AP) — Adrian Peterson wasn't in peak shape two games into this comeback season, so he showed up at Minnesota's practice facility on his day off this week for a series of 100-yard sprints, 18 in all.

If he didn't feel quite right then, he looks like he's in mid-career form now.

Peterson plowed through San Diego's defense for 126 yards and two touchdowns on 20 rushes in three quarters on Sunday, and the Vikings trampled Philip Rivers and the injury-depleted Chargers 31-14.

"My legs felt lighter today," Peterson said, adding: "I felt good, the body felt good, mind was in a great place and, yeah, I think I'm back."

Hours after his wife, Ashley, gave birth to their son, Axyl, Peterson crossed the goal line for the first time in more than 22 months. His second touchdown was a vintage run around right end, a 43-yard scamper he set up with a vicious stiff arm on Jimmy Wilson. That allowed him to turn the corner and straddle the sideline before bouncing off a diving Eric Weddle as he veered back toward the middle of the field.

"I saw the back of his jersey running," left guard Brandon Fusco said, "and it was like good old times."

Peterson high-stepped into the end zone, dropping to both knees in front of the goal post with his arms stretched out in celebration. The last time he scored was Nov. 24, 2013, at Green Bay, before a foot injury hampered him down the stretch that season. Fallout from the child abuse case against him last year kept him out of all but one game.

"He's obviously one of the best running backs in the history of the game," Chargers coach Mike McCoy said.

Peterson could've had a third score, but fullback Zach Line took the first-and-goal carry late in the third quarter for a 24-7 lead. After turning 30 in March and missing essentially a whole season, questions rose about how Peterson would fare this fall.

"This week in practice was the first time it looked like Adrian I remember," said linebacker Chad Greenway, whose 91-yard interception return in the fourth quarter helped the Vikings (2-1) raise their home record under coach Mike Zimmer to 7-3.

What made Peterson's show-stealing sprint so important was the momentum the Chargers (1-2) took into halftime on a nine-play, 90-yard drive that sucked the life out of the sun-soaked, sellout crowd.

Rivers found Malcom Floyd open for 39 yards on third-and-18. Four straight passes toward Keenan Allen later, the Chargers cut the lead to 10-7. On the 34-yard touchdown, Allen slipped between Xavier Rhodes and Andrew Sendejo, and the two teammates collided trying to tackle him. Rhodes' neck jerked backward, and he left the game with a head injury after being slowly guided off the field.

Rivers was pulled for Kellen Clemens midway through the fourth quarter when the deficit reached 24 points. Sacked four times for a loss of 28 yards, Rivers went 21 for 34 for 246 yards with two turnovers and took a hard hit to the midsection from Anthony Barr in the third quarter.

"With these great quarterbacks, the more they're under duress, the more difficult it is for them," Zimmer said

Center Chris Watt (groin), left guard Orlando Franklin (right ankle) and left tackle King Dunlap (concussion) all left the game with injuries, leaving the Chargers with only five available, let alone healthy, linemen. Rivers refused to use that excuse. He said he was "most sick about" the throw he forced to Stevie Johnson that Greenway grabbed after a deflection.

"Just trying to will a touchdown when it really wasn't necessary. We had to score three times anyway," Rivers said.