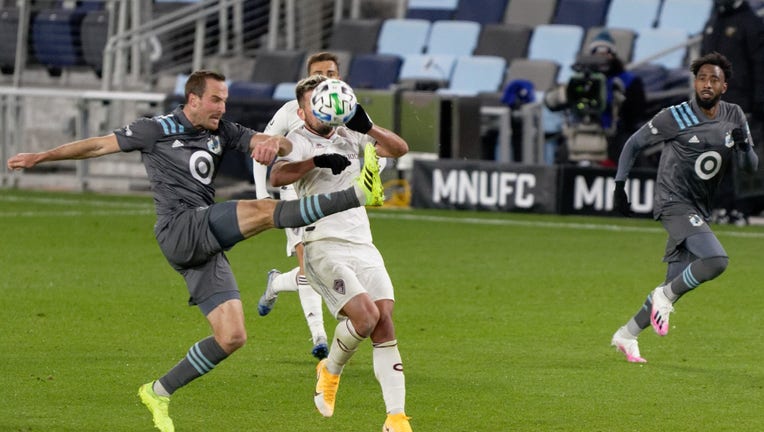 MINNEAPOLIS - It’s been a season of adjusting and uncertainty for Minnesota United and coach Adrian Heath, but they know this much with two regular season games remaining: They’ll be in the Major League Soccer playoffs for the second straight year.

Heath confirmed on Tuesday that the Loons have not had any positive COVID-19 tests since Saturday. Their match against Chicago Fire FC, set for Wednesday night, is on as scheduled after it had to be originally postponed due to a player testing positive for COVID-19. The Loons have been limited to individual and small-group training with recent positive tests.

Heath says he wakes up daily around 6 a.m. to hear from Stacey Hardin, the team’s head trainer and director of sports medicine and rehabilitation. She delivers the good news and bad, they’ve either had a player test positive or avoided COVID-19.

“It’s day to day at this moment in time,” Heath told reporters Tuesday via Zoom.

What they do know is they’ll play their final two regular season matches at Allianz Field, knowing they’re a playoff team for the second straight year. Minnesota United is currently fourth in the Western Conference at 30 points, and locked up a playoff appearance. They’re 4-1-2 at Allianz Field this season.

It’s been a roller coaster of a season for the Loons. They started 2-0 with a pair of road wins before the COVID-19 pandemic shut down the season. It resumed with the MLS is Back Tournament, and now games are played in empty stadiums.

With daily testing, he doesn’t know will be available or if they can field a team for a game. Add to that the Memorial Day killing of George Floyd in Minneapolis. The aftermath including rioting near Allianz Field, and players using their platform to protest.

With two games left, they’re looking to build confidence before the playoffs. They've won two straight and are unbeaten in their last six matches.

“I think it speaks volumes of the attitude and the application of the players and staff. It’s been a huge effort from everybody. Let’s do ourselves justice because if we play like we can, we can certainly make life difficult for most of the teams,” Heath said.

Chicago Fire FC will have plenty of motivation coming into Wednesday night’s game. They’re still fighting for a playoff spot, sitting 10th in the Eastern Conference. Ten teams in the East make the playoffs, with the bottom four competing in play-in matches to determine the top six teams.

Atlanta United is tied with Chicago at 22 points, and two other teams are one point back. Chicago has everything to play for.

“It’s a huge game for them, so I’m hoping the fact that the game will mean so much to them will put our players in the right frame of mind,” Heath said.