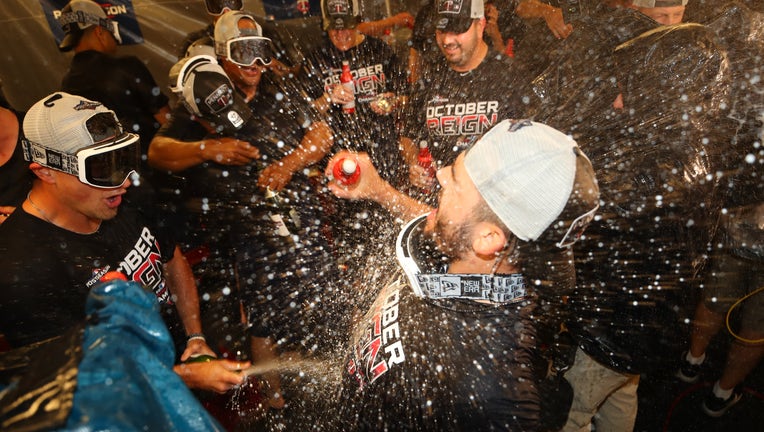 Members of the Minnesota Twins celebrate winning the American League Central Division title after a 5-1 win against the Detroit Tigers and a Cleveland Indian loss at Comerica Park on September 25, 2019 in Detroit, Michigan. ( Gregory Shamus )

MINNEAPOLIS - Gopher football made history, the Twins got back into the American League playoff mix and the Minnesota United had a historic year on a few fronts.

Jerseys were retired, front office leaders changed in two franchises and one beloved coach was retained after a tumultuous season full of drama. The Gopher hockey program also lost a legend before 2019 was over.

Minnesota sports always leave us wanting more, and for the die-hard fans, all we know is disappointment when our teams play under the bright lights on the national stage, or in the playoffs if we’re lucky enough to get there.

In no chronological order, here are some of the top sports stories of 2019:

The Minnesota Twins' search for a new manager is over as the organization officially welcomed Rocco Baldelli to Minneapolis Thursday.&nbsp;

Fox 9’s Jim Rich broke the story that actually started in October 2018. The Twins were replacing manager and fan favorite Paul Molitor with Rocco Baldelli, who had been on the coaching staff with the Tampa Bay Rays. Little did we know that by the end of the 2019 season, Baldelli would lead the Twins to their first AL Central title since 2010 and earn AL Manager of the Year honors.

The Twins won 101 games in Baldelli’s first season, and he became the second AL manager in baseball history to win the award in his first season as manager. He received 13 first-place votes in the ballot process. Now, the next step is to win a playoff series after getting swept yet again by the Yankees. Twins’ fans are still waiting for the team to sign a big-name pitcher, but the good news is Spring Training is right around the corner.

Rosas: Saunders ‘represents everything Minnesota is about’

Ryan Saunders was introduced Tuesday as the next Timberwolves’ coach, the 11th in franchise history.

The Timberwolves revamped their front office while other teams were chasing the NBA title this spring. Team owner Glen Taylor hired Gersson Rosas to take over the front office as the president of basketball operations, replacing Tom Thibodeau, who ended up not being the right fit for Minnesota despite orchestrating a trade for Jimmy Butler and getting the franchise back to the NBA Playoffs for the first time in 14 years.

Rosas wants to a build a family-first, championship-caliber organization. He decided he’s going to do it with a familiar face on the bench. Ryan Saunders was retained after going 17-25 in the final 42 games as the interim coach in 2018-19. Several Timberwolves players gave their vocal support for Saunders in the offseason, and the transition remains a work in progress as the Wolves are 11-20 through their first 31 games this season. 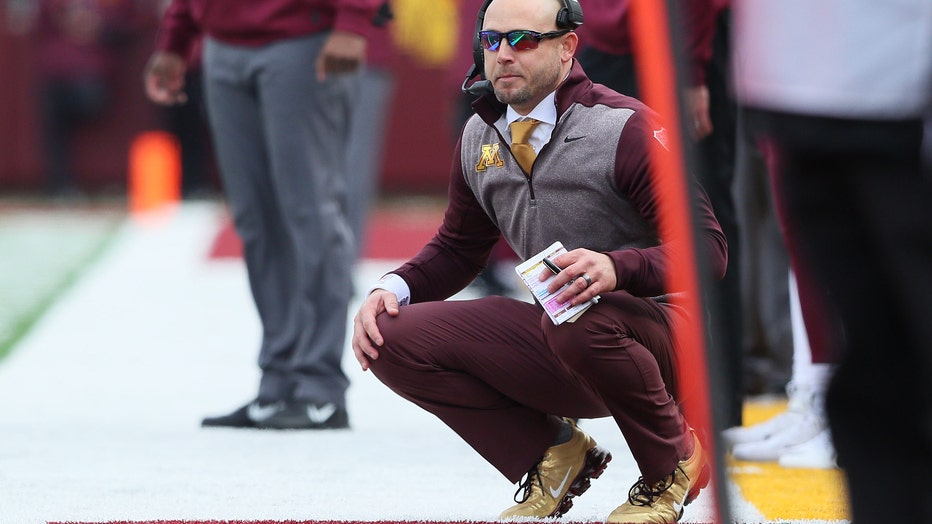 PJ Fleck wants to bring a championship back to Gopher football, and he almost got the Gophers to the College Football Playoff in just his third season with the program. Fleck signed a 7-year contract extension to stay in Minnesota in the days leading up to the Gophers’ historic 31-26 win over then No. 4-ranked Penn State.

The Gophers were ranked as high as No. 8 in the College Football Playoff. They won’t win a title this year, they’ll have to settle for at least 10 wins for the first time in 115 years. That includes seven Big Ten wins for the first time ever. The Gophers fell back to No. 18 in the rankings after losing their home finale to Wisconsin, with ESPN’s College GameDay in town. The Gophers were the only program, other than LSU, to have two 1,000-yard receivers (Tyler Johnson, Rashod Bateman) and a 1,000-yard rusher (Rodney Smith), in the same season. Minnesota had nine players named to All-Big Ten teams, and safety Antoine Winfield became the program’s first consensus All-American since Greg Eslinger in 2005.

The Gophers face Auburn in the Outback Bowl on Wednesday, looking to put the cherry on top of history and raise the bar for 2020.

New Wild GM Bill Guerin talked to FOX 9's Jim Rich about why he was attracted to the Wild and why he loves the State of Hockey.

The other front office shakeup in Minnesota sports happened on the east side of the Mississippi River back in July. Still sour from missing the playoffs for the first time in six seasons, Wild owner Craig Leipold fired Paul Fenton as general manager. He was on the job for just 14 months and made several roster changes last season, including trading Nino Niederreiter, Charlie Coyle and Mikael Granlund.

The Wild replaced Fenton with Bill Guerin in August. After a slow start, the Wild are 19-16-5 on the season and 10th in the Western Conference with 43 points.

The Loons made their home debut at Allianz Field Saturday in what is being considered by fans the greatest moment in Minnesota soccer history.

They settled for a 3-3 tie, and most of the near 20,000 in attendance stood for the full 90-plus minutes as they witnessed history. Loons fans exploded with joy after Ozzie Alonso got the historic first goal at the new state-of-the-art soccer facility in the 13th minute. Turns out, it was a pretty historic season for the Loons as a whole. They finished fourth in the Western Conference with a 15-11-8 record (53 points) to earn a home game in the MLS Playoffs.

Minnesota’s 42-7 win at Rutgers to improve to 8-0 will be a night that Casey O’Brien will never forget. The four-time cancer survivor beat the odds and played in his first college game for the Gophers as a holder for extra points on the special teams unit. O’Brien held for three extra points that were all converted in the victory.

O’Brien was mobbed by his teammates after the first successful point after, and shared a long embrace with coach PJ Fleck on the sidelines that went viral on social media. O’Brien made his TCF Bank Stadium debut in Minnesota’s 34-7 win over Nebraska. Since, O’Brien has had to have a fifth surgery after doctors found a spot on one of his lungs. It was removed, and he again was declared cancer-free.

Joe Mauer talks about throwing out the ceremonial first pitch to his dad after having his No. 7 retired at Target Field Saturday night.

June 15 will always be a special day in Joe Mauer’s heart. The St. Paul native spent his entire 15-year playing career with the Twins, and had his No. 7 jersey retired in the middle of June. The Twins held a roughly 45-minute pregame ceremony for Mauer, and he himself gave a nearly 12-minute speech. His jersey now hangs next to manager Tom Kelly, who led the Twins to World Series titles in 1987 and 1991.

More than 30 former Twins were at Target Field for the ceremony, including about 20 of his teammates. Signs pointed to his retirement from baseball after he put on catcher’s gear for one pitch in the 2018 regular season finale before taking a curtain call. Mauer played 923 games in eight seasons as a catcher before having to move to first base due to concussion issues. He won three Gold Glove awards and was a 6-time All-Star.

Facing one of their biggest rivals Saturday, the Minnesota Lynx retired Lindsay Whalen's jersey and unveiled the historic No. 13 in the Target Center rafters.

One week before Joe Mauer’s jersey was retired, it was Lindsay Whalen’s turn. The most decorated women’s basketball player in the history of Minnesota basketball now has her No. 13 hanging from the Target Center rafters. The Lynx honored the Hutchinson native in April before facing the L.A. Sparks.

She led the Gopher women’s team to its only NCAA Final Four appearance in 2004. She came to the Minnesota Lynx in a trade with the Connecticut Sun in January of 2010. In nine seasons with Minnesota, she led the Lynx to four WNBA titles and won two Olympic gold medals. She was also a six-time All-Star and appeared in eight WNBA Finals.

Whalen now coaches the University of Minnesota women’s program, which is off to an 11-1 start this season. 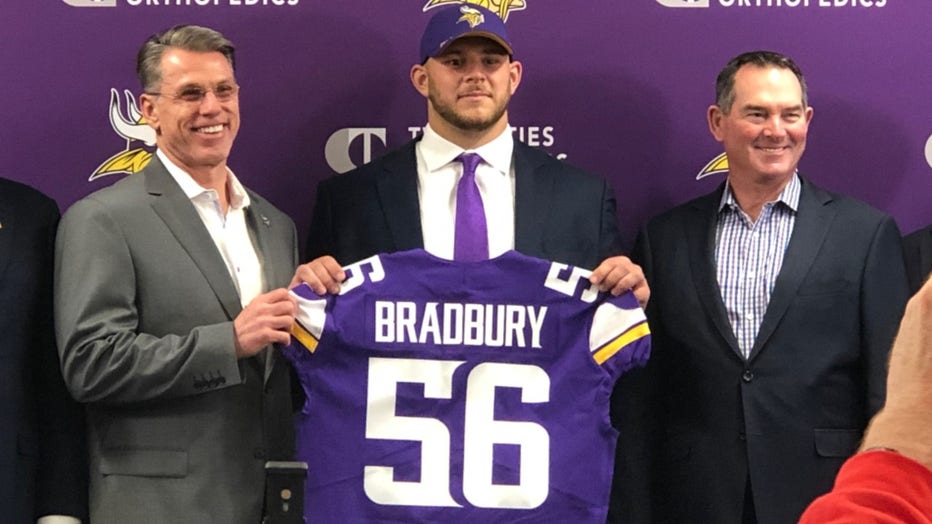 The Vikings drafted N.C. State center Garrett Bradbury with the No. 18 overall pick in the NFL Draft.

Garrett Bradbury’s life changed forever last April with one ring on his cell phone while he sat on a couch with friends and family in North Carolina watching the first round of the NFL Draft. One of the best offensive linemen in college football picked up the phone, with Vikings general manager Rick Spielman on the other end, asking if he was ready to be a Viking.

Bradbury has had ups and downs in his rookie season, but he’s started all 16 games so far and will experience his first NFL playoff game on Sunday at New Orleans.

The Minnesota Timberwolves traded for Jarrett Culver in NBA Draft.

Wolves trade up, draft Jarrett Culver with No. 6 pick

He had to wait a few weeks for it to become official, but Jarrett Culver became the newest first-round pick for the Minnesota Timberwolves back in June. On NBA Draft night, Gersson Rosas traded the No. 11 overall pick and Dario Saric to the Phoenix Suns for the No. 6 pick. With that selection, the Wolves picked Culver, a guard who had led Texas Tech to the Final Four in Minneapolis back in April.

One thing that won’t be questioned in Culver’s rookie season is his work ethic. After being picked and fulfilling media duties on NBA Draft night, he went and found a gym to work out. On the morning he was being introduced with other Timberwolves rookies, Culver was at Mayo Clinic Square working out and let Rosas in the building.

The Wolves remain a work in progress this season, sitting at 12-20 through 32 games.

It took six years to do it, but Richard Pitino got his first NCAA Tournament win with the Gophers last season in his second appearance with the program. Minnesota beat Louisville, where his father Rick was fired amid scandal, 86-76 in front of a strong contingent of Gophers fans in Des Moines, Iowa. The Gophers route to the Big Dance included a Senior Night win over Purdue, a win at Northwestern and then winning two games at the Big Ten Tournament to reach the semifinals. The Gophers’ season ended with a 70-50 loss to Michigan State in the NCAA round of 32 and a 22-14 overall record.

Funeral services were held Sunday to honor the life of a Minnesota hockey legend.

The University of Minnesota men’s hockey program lost a legend in early December, when former player and coach Doug Wood passed away at the age of 75. Woog spent 14 seasons as the head coach of the Gophers, leading the program to 12 NCAA Tournament appearances and six Frozen Fours.

Woog, a South St. Paul native, played for the Gophers under John Mariucci. He was inducted into the University of Minnesota’s Athletics Hall of Fame in 2000, and 2002, earned the same honor at the U.S. Hockey Hall of Fame.