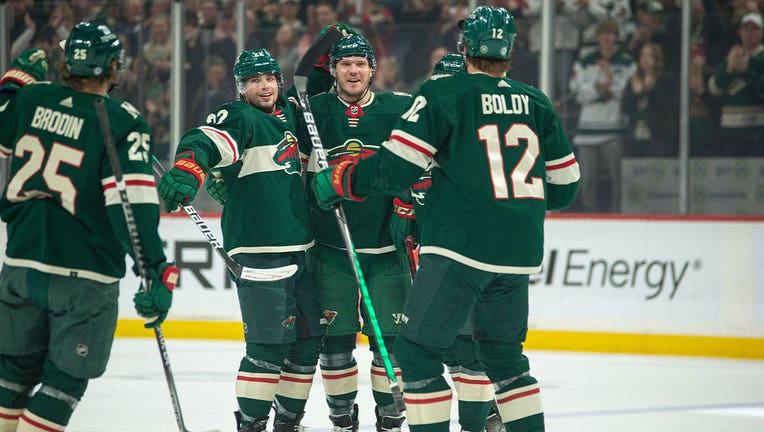 Minnesota Wild Defenceman Dmitry Kulikov (7) celebrates with teammates after a goal during the NHL game between the San Jose Sharks and the Minnesota Wild on April 17th, 2022, at Xcel Energy Center in Saint Paul, MN. (Photo by Bailey Hillesheim/Icon Sportswire via Getty Images)

MINNEAPOLIS - The Minnesota Wild is in the Stanley Cup Playoffs for the ninth time in the last 10 seasons after getting a 5-4 win in overtime against the San Jose Sharks Sunday night at Xcel Energy Center.

Jared Spurgeon scored in overtime, tipping a shot by Kevin Fiala, for the game-winning goal. The play capped a four-point night for Fiala, who had one goal and three assists, as the Wild improved to 47-21-7 on the season. He scored at 8:54 of the third period to tie the game 4-4, and it eventually went to overtime. Spurgeon’s game-winner 65 seconds into the extra session was his second tally of the night.

Their 101 points is currently third in the Western Conference, and second in the Western Division behind the Colorado Avalanche. It’s the most points in franchise history after 75 games.

In addition to Spurgeon’s two goals and Fiala scoring, the Wild got goals from Dmitry Kulikov and Matt Boldy.

The Wild has seven regular season games remaining before the Stanley Cup Playoffs and need to keep pushing if they want home ice. The Wild travels to the Montreal Canadiens Tuesday night before ending the regular season with five of its last six games at home.

Making the playoffs is nothing new for the Wild, but they’ve struggled to make noise once getting there. The Wild lost in seven games to the Vegas Golden Knights in the first round last season, and has not won a playoff series since 2015.

The Wild will be making its 12th appearance in the Stanley Cup Playoffs in franchise history. Information on playoff tickets will be released after the end of all regular season games on Friday, April 29.