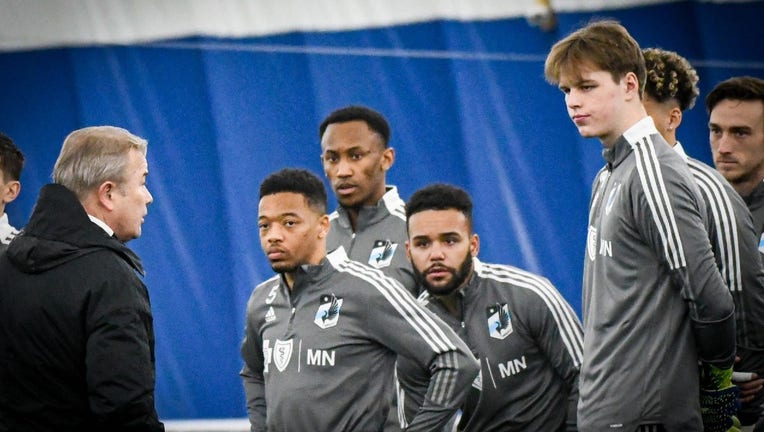 Minnesota United held its first full team training session of the 2021 MLS preseason on Monday at the National Sports Center in Blaine.

MINNEAPOLIS - Minnesota United technically isn’t scheduled to start its preseason for another week, but more than 20 players and coaches were at the National Sports Center in Blaine on Monday for the team’s first full training session of 2021.

It had the feel of the first day of school as the Loons aim to build on a 2020 campaign where they were knocking on the door of playing for a Major League Soccer championship.

"It’s just nice to get them back. Just nice to be back working again, it seems like it’s been an eternity, the offseason this year. Didn’t think we’d still be going through wearing (masks), but hey it’s just nice to be back," Loons’ coach Adrian Heath said. "As usual, it’s like the first day at school. A lot of optimism from everybody. The lads have come back in really good shape."

To start a week earlier than official beginning of the MLS preseason next Monday, Minnesota United players and coaches had to arrive in the Twin Cities early, go through a mandatory quarantine and pass regular COVID-19 testing.

The Loons still have a few players yet to arrive, but they had plenty to go through a full team training session on Monday in Blaine.

Minnesota United wrote a new chapter in its history in 2020. The Loons not only got to the MLS Cup semifinals, they had a 2-0 lead on Seattle Sounders FC. But Seattle came storming back for a 3-2 victory to end the Loons’ season.

Minnesota United will spend the first half of its preseason training in Blaine. The Loons will head to Orlando on March 23, where they’ll hold two weeks of training camp and friendly matches. They’ll return to Minnesota on April 10, and the MLS season-opener is April 17.

"The most important thing of any preseason is to get everybody fit and healthy for the opening day of the season," Heath said.