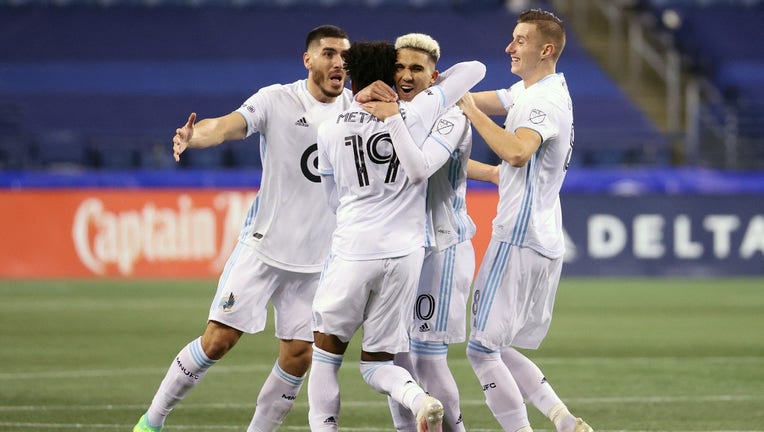 MINNEAPOLIS - It’s a moment about 18 months in the making for Minnesota United and its crazy, loyal fan base.

For the first time since a December 2019 win over the L.A. Galaxy in the Major League Soccer playoffs, the Loons are anticipating a capacity crowd as they host Austin FC at Wednesday night at Allianz Field. Minnesota United was set to begin a four-game home stand in April of 2020, when the MLS season got put on hold due to the COVID-19 pandemic.

The Loons eventually returned to their home stadium later in the year, but had to play without fans.

Wednesday night could have a feel like their inaugural game there back on April 13 of 2019, a 3-3 tie against New York City FC. Minnesota United will be among the first professional local teams to bring back full fan capacity, with COVID-19 restrictions lifting. The St. Paul Saints, the Class AAA affiliate of the Minnesota Twins, also have full fan capacity at CHS Field. University of Minnesota athletics announced Tuesday they plan to have full fan attendance in the fall.

"The fact that we can return to an almost full house tomorrow night, I think everybody is really excited," Minnesota United CEO Chris Wright said. "Excited about the atmosphere, excited about our fans returning to a full house."

The Loons started the season at about 25 percent capacity at Allianz Field, which is about 4,000 fans. They’ve been planning for several weeks to return to full capacity this summer after months of COVID-19 uncertainty, and have nearly 20,000 soccer fans ready to sing "Wonderwall" and celebrate what they hope is Minnesota United’s third home win of the 2021 season.

The Loons are currently 2-2 at home this season, and 17-4-9 since opening Allianz Field in 2019. Defender Michael Boxall said at training Tuesday he hopes it’s so loud that it’s tough to talk to someone within five yards of him during the match. Adrian Heath says the challenges that come with a loud crowd are a good problem to have.

"Thank God we’re having a communication problem, it means we’ve got a full house. We’ve had a special atmosphere within Allianz when we’ve played there," Heath said. "The one thing I’ve said to the players is that we have to approach the game, play the team and not the occasion that we’re playing. I want to get the crowd in the game, and the way we get the crowd in the game is by giving them something to cheer."

They’ve gotten a taste of what it’s like to have fans in the building, but they should have their first full house in 18 months against Austin FC. Wright said about 500 season ticket accounts have opted out for the remainder of the 2021 season, and their financial commitment has transitioned into 2022. They've gotten a positive fan response from releasing those tickets left for 2021.

About 200 tickets remained for Wednesday’s match as of Tuesday morning, and a packed house is expected. That’s exactly what the team wants, after playing in front of no or limited fans for nearly two years.

"We’ve been waiting for this for a long time. We’ve had a lot of players come through this building who have been waiting for it. But also a lot of fans who we owe a good performance to," Boxall said. "It’s certainly loud when we bring the energy as well to match them, so we’ve got to do our jobs to make sure that that place is can’t talk to a person five yards from me."

Maybe more importantly, they’re looking to keep putting points up in the Western Conference standings. After an 0-4 start where the Loons were out-scored by a combined 10-3, they’re 2-0-2 in their last four matches with a pair of 1-0 wins and 1-1 ties.

Wednesday is also Pride Night at Allianz Field, and the team will have several ways to recognize and contribute to LGBTQ communities and causes. The façade at Allianz Field will also be lit in rainbow colors.

The Loons are expecting a full house Wednesday night, and it’ll be welcomed with open arms.

"It’s not really one of those situations that you can explain with a player how much it lifts you. We’ve kind of experienced the 4,000, and that’s really pushed us in the last 10-15 minutes of the games we’ve been chasing a goal," Boxall said. "Even that’s like pretty damn loud, so I’m not even sure what to tell myself heading into 20,000. It’s going to be fun."