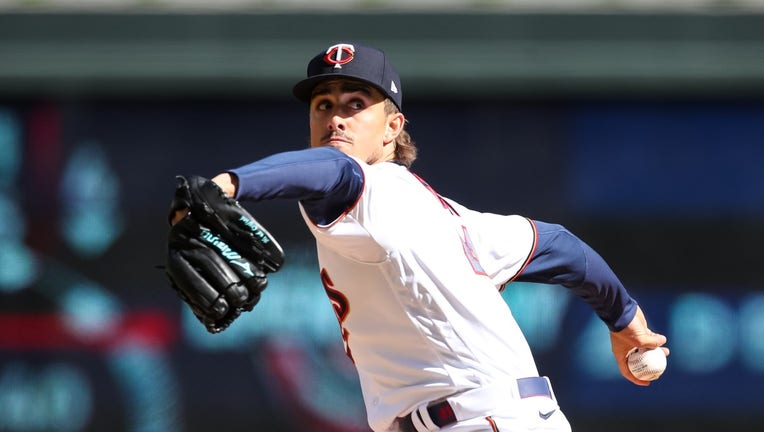 Joe Ryan #41 of the Minnesota Twins delivers a pitch against the Seattle Mariners in the second inning on Opening Day at Target Field on April 8, 2022 in Minneapolis, Minnesota.  ((Photo by David Berding/Getty Images))

MINNEAPOLIS - The Minnesota Twins entered Opening Day talking about building a championship culture, competing for the American League Central Division and making a run in the playoffs.

The Twins’ offense got off to a tough start on Friday at Target Field, managing just three hits off Robbie Ray in a 2-1 loss to the Seattle Mariners in front of more than 35,000 fans on a day where the high temperature only got to the low 40s. Ray is the Mariners' ace, coming off winning the 2021 American League Cy Young Award. He went seven innings, allowing just one run.

In his Twins’ debut, star shortstop Carlos Correa got a solid single to center field in his first at-bat. It was one of just four hits for the Twins on the day. After the loss, Correa was far more optimistic than frustrated by an 0-1 start.

"It was a tough day to hit. It was just a tough day, but I’m happy the way we competed today. When you look at our lineup on paper, you know we’re going to hit so I’m not too worried about that," Correa said.

The main problem offensively: Correa’s single was the only hit among the top three hitters in the Twins’ lineup. Byron Buxton, Correa and Jorge Polanco combined to go 1-for-11 with two strikeouts and a walk. Miguel Sano also finished 0-for-3 with a walk, and a strikeout.

"We gave ourselves some opportunities against a tough pitcher and a tough pitching staff. We only pushed one across, there’s really no other way around it," Twins manager Rocco Baldelli said. "We’re going to score more than one run in most ballgames. We ran into some good arms today and that was really it."

The Minnesota Twins started the 2022 season with a 2-1 loss to the Seattle Mariners on Friday in front of more than 35,000 fans at Target Field.

Gary Sanchez nearly gave the Twins a walk-off win in the ninth. Luis Arraez singled to start the inning, and with two out, Sanchez launched a fly ball to the warning track in left field. On most summer days in the heat and humidity, it’s probably a game-winning home run. In Friday’s 40-degree weather, it came up a few feet short.

"I think the ball was high enough, I thought it was gone but today wasn’t the day," Sanchez said.

Both Correa and Gio Urshela said after the game they thought it was a home run when it left Sanchez's bat.

"One hundred percent thought it was going to go. Maybe a little bit too high, I don’t know. Maybe the cold? I don’t know how it works here. Definitely thought he got that one," Correa said. I felt like most ballparks, that ball goes. There’s got to be 10 ballparks where that ball is gone."

The Twins’ lone run came from Urshela, who launched a solo home run to left center in the fourth in his first game in a Minnesota jersey. It cut their deficit to 2-1.

"Just trying to get a ball on the barrel," Urshela said.

Urshela and Sanchez came to the Twins in the trade that sent Josh Donaldson to the New York Yankees. That deal also gave the Twins room to sign Correa.

Joe Ryan got the Opening Day start for the Twins, allowing two earned runs on two hits while striking out four, walking four and hitting a batter. He finished four innings with 70 pitches, 42 for strikes. The Mariners’ lone runs came in the first on a two-run homer from Mitch Haniger, on an 0-1 pitch.

"I’m sure he wanted to be a little sharper in some ways, but he gave us a chance to win and I told him that when I took him out of the game," Baldelli said of Ryan.

The Twins fell to 27-35 all-time on Opening Day with Friday's loss, including an 11-13 mark at home. It was the fourth home opener at Target Field since the ballpark opened in 2010. Friday was also the third time in franchise history the Twins didn't score more than one run, and had four or fewer hits, on Opening Day.

The Twins didn’t get the payoff with an Opening Day win, but their confidence is high that if they pitch and play defense like they did Friday, the offense will come around.

"It’s a positive first day at the office. Even though we didn’t get the win, I’m excited for the season," Correa said.