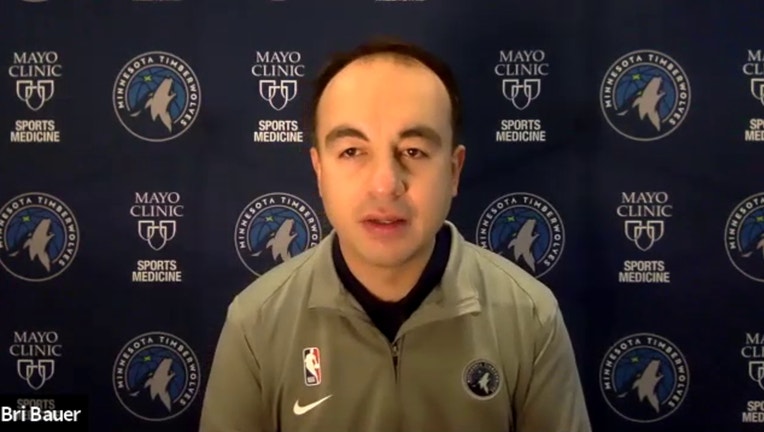 Timberwolves front office head Gersson Rosas spoke with reporters Wednesday morning with the NBA Draft less than a month away. The Wolves have the No. 1 overall pick.

MINNEAPOLIS - The NBA’s trade deadline expired at 2 p.m. Thursday, and the Minnesota Timberwolves could not have been quieter after this time last year, Gersson Rosas completely overhauled the roster.

The Wolves didn’t make any deals on Thursday, and Rosas didn’t say if he even came close. It was about a year ago that Rosas dealt Andrew Wiggins to the Golden State Warriors, and in return D’Angelo Russell came to Minneapolis to pair up with Karl-Anthony Towns.

The problem? The pair has been together on the court healthy for just five games. Rosas didn’t make any deals Thursday, largely because he hasn’t seen enough of the top players on Minnesota’s roster to see what it lacks.

"Considering we’ve done 9-10 trades over the last 18-24 months, there is a period of time where you’ve got to see what you have, and you have to evaluate it. I don’t think there’s any other team that’s more aggressive than us in the NBA in terms of pursuing opportunities," Rosas said Thursday afternoon. "I like the group we have, we haven’t seen this group together enough and that played a big part in it. We want to see what we have in order to make the best educated decisions we make."

Towns has missed time this season due to injury, and a battle with COVID-19. Russell, who is working out on his own and is cleared to be with the team, is expected back late next week after having arthroscopic knee surgery. Malik Beasley was having a career year before being suspended 12 games for an off-court issues. He’ll be back Saturday night.

What we knew before the deadline was Towns, Russell and Edwards were non-negotiable for trades. But if the price was right, Ricky Rubio or Jaden McDaniels could've been dealt. Ultimatley, it was a quiet trade deadline for Minnesota.

Rosas is crossing his fingers that as soon as next week, he’ll have what looks like a future corps of Towns, Russell, Beasley and No. 1 overall pick Anthony Edwards on the court together.

"For us, the young talent that we’ve acquired, now we’ve got to develop it. We’ve got to see it together," Rosas said. "To change course mid-stream, not knowing what this group has, is short-sighted.

"We don’t do deals for the sake of doing deals," Rosas said.

It’s been another lost season for the Timberwolves. They’re 10-34, last in the Western Conference and there’s no guarantee they’ll have a first round pick in the 2021 NBA Draft. They dismissed Ryan Saunders, and Chris Finch has taken over.

There were whispers of making a deal to add a power forward, Aaron Gordon or John Collins. At the end of the day, the price to make more changes when Rosas hasn’t seen his vision get on the court together in a game scenario wasn’t worth it.

"To reshuffle the deck for marginal value without knowing exactly what’s here is not beneficial to us," Rosas said.