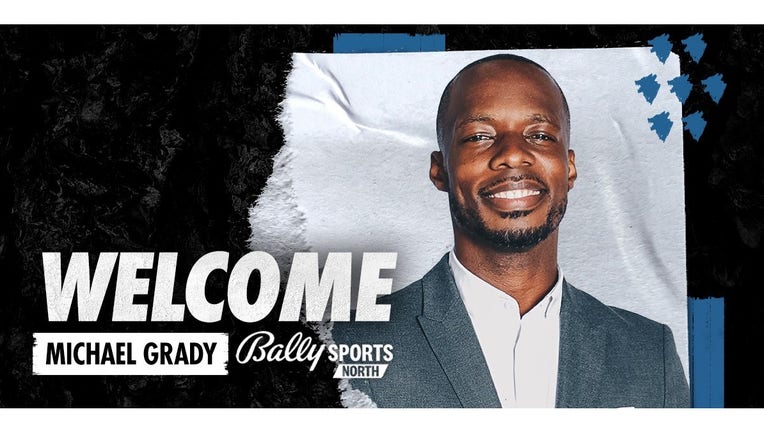 MINNEAPOLIS - The Minnesota Timberwolves on Thursday announced that Michael Grady will be the team’s now play-by-play announcer on Bally Sports North.

Grady will team with Jim Petersen, who will provide color analysis for the Timberwolves during the 2022-23 season. Grady will also be involved on several Timberwolves’ platforms, at team events and with team content. Grady will replace Dave Benz, who spent 10 seasons as the Timberwolves' play-by-play announcer.

Grady, 39, is a multi-time Emmy-winning reporter, host and producer and 2016 Indiana Sportscaster of the Year. He comes to the Twin Cities after spending the last six years with the YES Network in New York as the Brooklyn Nets courtside reporter. His play-by-play experience includes the New York Liberty of the WNBA, the 2022 WNBA Commissioners Cup along with hosting the YES Network’s pre-and post-game coverage for the New York Yankees.

Grady has also spent time on the sidelines for CBS Sports calling NFL and college football, as well as calling play-by-play for college basketball for the network.

"Today is a thrilling day for myself and my family as this has been my lifelong dream to be an NBA play-by-play announcer," Grady said in a team-issued statement. "I can’t wait to join Jim Petersen and the rest of the Bally Sports North crew calling games for this exciting franchise. I also look forward to interacting with our phenomenal Timberwolves fans and partners in the community to continue to tell the stories of this great basketball state."

The Timberwolves will open the 2022-23 season on Oct. 19 against Minnesota native Chet Holmgren and the Oklahoma City Thunder at Target Center.