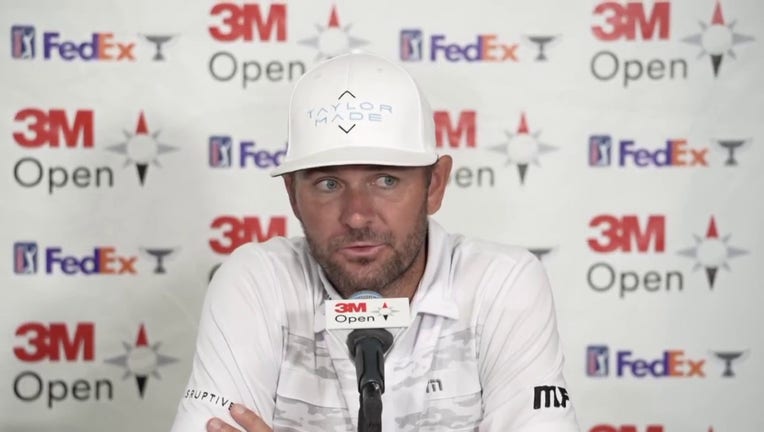 MINNEAPOLIS - Mardy Fish spent 15 years playing professional tennis, winning six ATP titles and being ranked as high as No. 7 in the world. He also won a silver medal at the 2004 Summer Olympics.

Pressure is nothing new to the Edina native, but he’ll feel a different set of nerves on the first tee at TPC Twin Cities at 9:02 a.m. Thursday. He was granted a sponsor’s exemption to play in this year’s 3M Open after a successful run on the celebrity golf circuit, where he’s got two victories.

Preparing for the 3M Open

With the 3M Open underway in a couple days, but many golfers and local sports names are already ready. FOX 9’s Dawn Mitchell has more from Blaine.

Fish will play his first two rounds with PGA pros Chase Seiffert and Seth Reeves. He’s the first to play a PGA Tour event after playing on the ATP, and he’s making his debut in his home state.

Fish has played golf most of his life. He played tennis starting at 6 years old, retiring from the game at 32. The process to get to Blaine started a few years ago, when he met and played golf with Jack Nicklaus. One of Nicklaus’s good buddies? 3M Open Executive Director Hollis Cavner, who is responsible for putting together the playing field.

Former Vikings tight end Kyle Rudolph, a good friend of Fish and a 3M ambassador, also put in a good word to Cavner.

"We just wanted to do something different and bring him in and see how he could compete. He can play, he will not embarrass himself," Cavner said at 3M Open Media day last month. "I think he’ll do just fine, he’s got a lot of game."

There will be nerves on the first tee at TPC Twin Cities Thursday morning, but it’s nothing compared to his tennis career. He recalled being at Wimbledon and before playing a match, saw his opponent asleep on a training table.

"I was the opposite of that," Fish said. "I was really a basket case before matches. Once they called my name or once I walked down on the court, I felt great."

So what’s the goal? The Minnesota native would love nothing more than to make the 36-hole cut, and play the weekend in his PGA Tour debut in his home state.

"I'm confident in my game, I know I can, I've worked really hard during the past couple months to kind of get myself into this type of golf shape," Fish said. "I've played golf my whole life, ever since I could stand, and so you're just hitting a little white ball around. I don't have to run after it or anything like that, so it's right there in front of you."

Fish dedicated most of his life to tennis. He didn’t finish high school, never went to college. He started on the ATP Tour in 2000, and his career took off. But it wasn’t all perfect.

He battled struggles with his mental health, which caused him to withdraw from the 2012 U.S. Open. He was eventually diagnosed with severe anxiety disorder. He went public with his struggles in a 2021 Neflix docu-series called "Untold: Breaking Point."

The response, he says, was overwhelming. That includes a message from a woman who repeatedly put off a presentation to co-workers because of anxiety. After watching Fish’s documentary, she gave the presentation the following day.

"When the doc came out, every day I had 50 messages from individuals that would say, ‘Thank you, I felt the same way and I wasn't able to tell my wife and now I am and I have the confidence to be able to do it because I don't feel like I'm alone.’ Definitely got a lot of ‘this saved my life,’ which obviously is really special," Fish said.

Now in a much better place mentally, Fish will put his golf game to the test in Blaine starting Thursday.

"I couldn’t be more humbled and excited." Fish said.