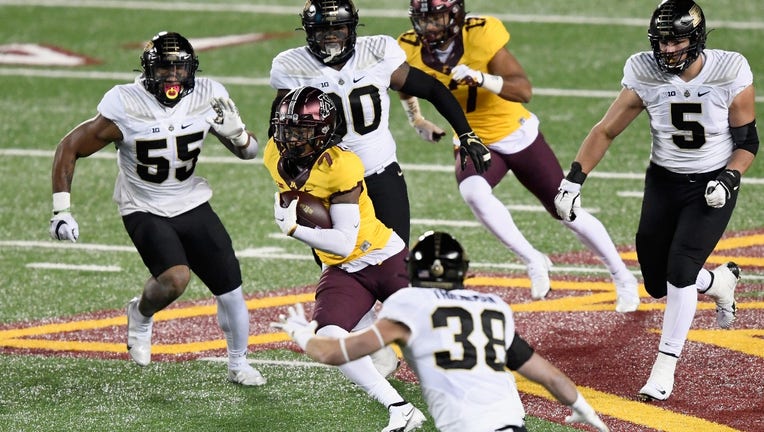 MINNEAPOLIS (FOX 9) - The University of Minnesota announced the Gopher football team will decline the opportunity to compete in a bowl this year. The Gophers' season is over with a 3-4 record after the team lost 20-17 in overtime at Wisconsin Saturday afternoon, their 16th loss to the Badgers in 17 years.

According to team officials, the decision was made by Athletics leadership, head coach P.J. Fleck and the football team.

"The health and safety of our student-athletes has always been our first priority. They invested a tremendous amount of physical and mental energy into competing in the Big Ten season this year and proudly represented Minnesota. The season was filled with daily off-field adversity caused by the pandemic, but their desire to play never wavered and they sacrificed so much in their personal lives to be able to compete in the Maroon and Gold this year. Right now, our focus is strictly on their well-being off the field, and we look forward to them being able to responsibly spend some of the remaining holiday season with family and loved ones. We will return our attention to football when everyone is back on campus in mid-January."

Fleck laid out what a bowl game for Minnesota might look like after Saturday's loss, due to COVID-19 restrictions. Projections had the Gophers playing in a bowl immediately after Christmas, meaning players wouldn't be with their families for the holidays. Team meetings have been virtual most of the season, and players would be spending most of their time by themselves in hotel rooms.

There can't be any team gatherings for bowl games or holiday celebrations. The Gophers are one of several teams across the country to opt out of bowl games.

"Our whole state is shut down. Let’s say your children is away at school, everything is shut down, can’t go anywhere and the thought of your son, Christmas morning having a boxed lunch sitting in their room because they can’t go anywhere. That’s Christmas?" Fleck said Saturday night. "You can’t have gatherings, you can’t have this big team dinner, you can’t have this big team Christmas, this big holiday, whatever you celebrate. School is done, nothing to do, nowhere to go. Think about if that’s your son, if that’s what’s best for your family. I’m not here to make that decision. This is about the kids, this is all about the players. We want to play football, we want to play in a bowl game, but there’s a lot of other factors that come into play here."

Minnesota was hit as hard as any program by COVID-19 this season. The Gophers had to cancel their initial game against Wisconson on Nov. 28, and their last home game the following week after 23 players and 26 staff tested positive for COVID-19.

The Gophers now get some much-needed time off to rest mentally and physically before spring football starts in 2021.