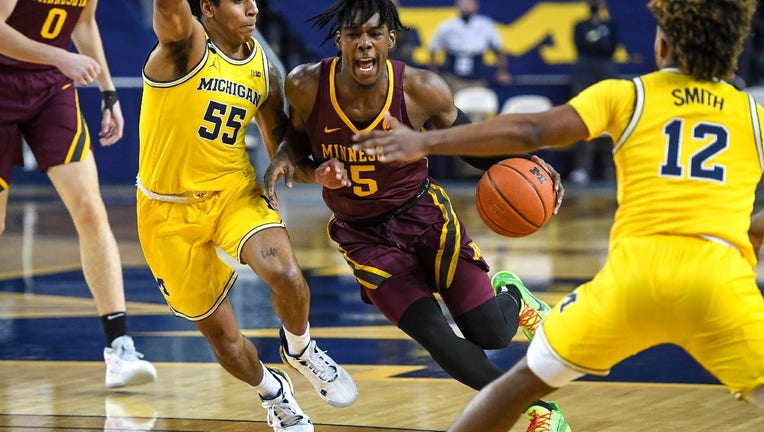 Marcus Carr #5 of the Minnesota Golden Gophers drives to the basket against Eli Brooks #55 of the Michigan Wolverines during the first half at Crisler Arena on January 06, 2021 in Ann Arbor, Michigan. ((Photo by Nic Antaya/Getty Images))

MINNEAPOLIS - At some point this season, the Gophers’ men’s basketball team is going to have to find a way to be competitive when it plays on the road in the Big Ten.

So far they’re 0-for-3 in that department after an 82-57 loss at No. 10-ranked Michigan Wednesday night. Minnesota opened the Big Ten season with a 92-65 loss at Illinois, then fell 71-59 at Wisconsin on New Year’s Eve. Wednesday, Minnesota got out-scored 50-31 in the second half and trailed by as many as 37 points.

The No. 16-ranked Gophers have now lost three Big Ten road games by a combined 64 points. Minnesota is now 10-3 on the season, and 3-3 in league play.

"We’ve had some great moments this year after 13 games, but we’ve had three duds. Those three that we’ve had duds against are some really good teams," Gophers coach Richard Pitino said. "Michigan has as much talent as any team in the country that I’ve seen."

Marcus Carr was the lone Minnesota player in double figures with 14 points. He scored eight straight to end the first half, getting the Gophers within 32-26 despite the team committing eight turnovers and shooting just 33 percent from the field.

The Gophers didn’t offer any resistance on defense, and Michigan never let off the gas.

"Honestly we just weren’t ready to play. We’ve got to always make sure to be the team with the most intensity. The team that plays with the most energy most of the time ends up winning. We didn’t do that tonight," said forward Isaiah Ihnen, who finished with five points. "We’ve just all got to play way more physical. It can’t happen like that again."

Hunter Dickinson led the Wolverines with 28 points and eight rebounds. He shot 12-of-15 from the field, and got most of his scores within a few feet of the basket. Isaiah Livers added 14 points, and Franz Wagner scored 12.

Nobody for Minnesota could guard Dickinson, who came into the game shooting better than 70 percent from the field for the season.

"He was phenomenal. He’s a really good player. I’ve never seen a kid shoot those type of percentages, everything just kind of dies into the basket," Pitino said.

The bigger problem for Pitino and the Gophers has been their lack of energy, especially on the road. They were casual with the ball, committing 12 turnovers, had just six assists on 22 made shots and took just six free throws. They also got out-rebounded 40-31.

But Minnesota didn’t have a response to Michigan’s suffocating defense. In one sequence in the second half, Chaundee Brown beat Carr to a loose ball near midcourt and took it for an uncontested dunk. The Wolverines did a lot of that in the win.

"We just weren’t tough enough. We’ve just got to come out with intensity and physicality each and every game. Tonight we didn’t do that," guard Gabe Kalscheur said.

Life doesn’t get any easier for the Gophers. They travel to face No. 5-ranked Iowa Sunday afternoon. The Hawkeyes will be looking for revenge after Minnesota rallied for a 102-95 win in overtime earlier this season at Williams Arena.

"When you’re offensively not moving the ball very well and then defensively you have no resistance, you’re probably going to be on the other side of a tough game," Pitino said. "We were ready for it versus Michigan State and Ohio State, not tonight."