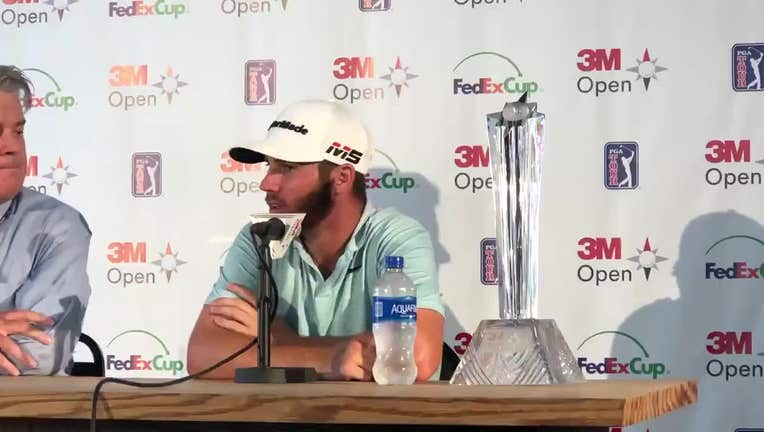 MINNEAPOLIS - Matthew Wolff got a taste of what winner’s treatment feels like as he arrived to TPC Twin Cities in Blaine this week for the second-annual 3M Open.

Wolff, 20 at the time, won the inaugural tournament last year after making a dramatic putt for eagle on the 72nd hole. It was his first PGA Tour win.

The 3M Open tees off Thursday in Blaine, Minnesota.

So when he arrived this week, he found that his space in the players’ parking lot was front and center. All the memories of last year came flooding back, and the hair on his arms probably stood up.

“I got a little chills walking in the clubhouse. Everyone's been extremely friendly. I'm seeing all the familiar faces and even got a parking spot right at the front row, which is usually a rarity considering my last name was with a W. It's awesome to be back here, and the course is looking great,” Wolff said Wednesday via Zoom.

He'll play in a charity event on the course Wednesday afternoon, then his title defense starts Thursday. Wolff earned over $1 million for winning last year’s event, but said he didn’t really splurge on anything with his newly-found riches. He did buy a house, though.

That said, TPC Twin Cities and the 3M will always be special for Wolff.

Wolff has yet to win on the 2020 PGA Tour schedule, but he did take second behind Bryson DeChambeau earlier this month at the Rocket Mortgage Classic. He's now got more than $2.7 million in earnings.

The 3M Open is going to look at lot different this year, with no spectators due to the Covid-19 pandemic. Gone are the corporate tents and food vendors. This year, it’s about preparation and the golf for the TV-only event.

“Obviously in these crazy times they're doing everything that they can to make it normal, but just really happy to be back. Everyone's been super friendly and looking for another great week,” Wolff said.

Brooks Koepka and Dustin Johnson are two of the biggest names in the 156-player field. They were asked about the events that took place in late May about 30 minutes south of the course, the civil unrest in Minneapolis after the officer-involved death of George Floyd.

“Well, it's tragic. I mean, it's pathetic what happened. To see 2 Tee-Scripts.com somebody's life to go and then you watch it multiple, multiple times, it's tough. You know, I get chills right now just even thinking about it. What happened is uncalled for and, you know, if there's anything good, we're starting to see change and I think that's important,” Koepka said.

“I mean, obviously it's a terrible situation what happened with George. Obviously this is a difficult time for everyone. No one ever wants to see something like that happen,” Johnson said. “Hopefully we can do things to mitigate those circumstances in the future.”