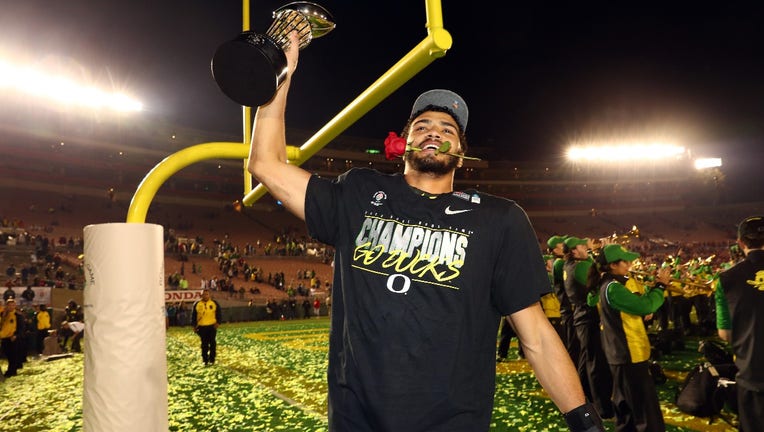 Troy Dye #35 of the Oregon Ducks celebrates after defeating the Wisconsin Badgers in the Rose Bowl game presented by Northwestern Mutual at Rose Bowl on January 01, 2020 in Pasadena, California. ((Photo by Joe Scarnici/Getty Images))

MINNEAPOLIS - To say it’s been a whirlwind month for Troy Dye would be understating things.

Like all of us, he’s confined to his home as we wait for the Coronavirus pandemic to run its course, and hope that life can resume to a new normal. Dye became a father on April 7 for the first time, and his life changed on April 25 in the NFL Draft.

He’s excited to be teammates with two of the better linebackers in the NFL in Anthony Barr and Eric Kendricks. He’ll also be reunited with former teammate Dillon Mitchell, a seventh round pick last year who played primarily on special teams.

The Vikings defense underwent an overhaul this offseason, but one rookie is determined to see Minnesota keep its tough-nosed reputation.

Mitchell was one of the first people Dye talked with after getting drafted by the Vikings.

“We talked about if I was on the board, it would be fun for me to go to Minnesota. To make it happen is pretty awesome, to be back with my original roommate and hopefully we’re able to live together again,” Dye said.

Dye was all over the field in four years at Oregon. At linebacker, he led the Ducks in tackles on the defense four straight years. He was named Second Team All-Pac 12 last year after making 84 tackles, 9.5 for a loss and 2.5 sacks in 13 games. He also had two interceptions, four pass break-ups and forced two fumbles.

“I think it’s just a product of the type of player I am. Just when I get out there I just want to do everything I can to help my team win the game,” Dye said. “I’ve always just loved to play the game at 100 percent. This is where my parents taught me how to play at 100 percent full speed because if you’re not, you’re going to get hurt. I just go full speed to the ball and good things happen when you get there.

Dye also has football in his bloodlines. His father, Mark, played collegiately at San Jose State. His brother, Tony, played at UCLA and briefly in the NFL and his brother, Travis, is a sophomore running back for the Ducks.

He realizes he may have to wait his turn to play linebacker for the Vikings. With Barr, Kendricks and Eric Wilson all back, Dye’s more immediate chance to make an impact will come on special teams.

Dye considers himself a tough player, willing to play through injury. He suffered a broken thumb and torn meniscus last season, and stayed on the field through both.

“At the end of the day, I came back for my senior year to play for a Pac-12 championship, play for a Rose Bowl. I wasn’t going to let anything that wasn’t life-threatening or a career-ending injury to stop me from playing the game,” Dye said. “If I can walk and I can run and I can play, I’m going to do it. I’m not going to sit on the bench and try to just milk stuff. I love to play the game, I love football so much that I’ll give everything I have for it.”

Now he trains, participates in the Vikings’ virtual offseason rookie program and waits for the call from the Vikings and the NFL that it’s safe to come to Minnesota.