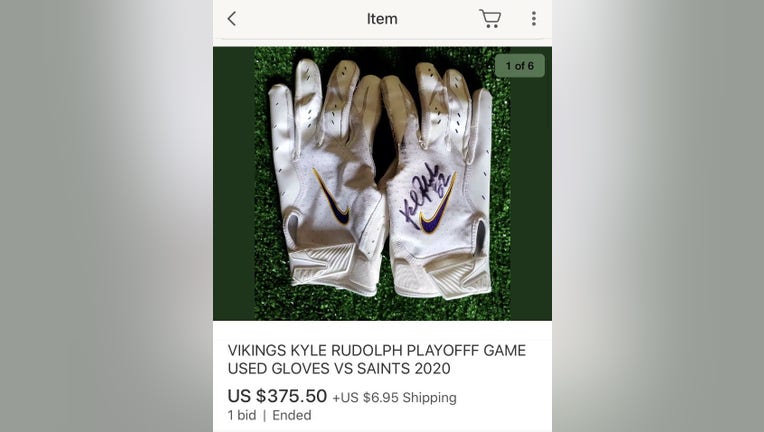 These playoff game-worn gloves ended up on eBay after Kyle Rudolph thought he donated them to a charitable auction. (@KyleRudolph82 via @flamingbagofpoo / Twitter)

EAGAN, Minn. (FOX 9) - Minnesota Vikings tight end Kyle Rudolph is going to have a good laugh about it at the end of the day.

After catching the game-winning touchdown in the NFC Wild Card win at New Orleans, a media member approached Rudolph in the Vikings’ locker room, asking him for his game-used gloves to then give to a charity event.

Rudolph was happy to oblige, and even signed the gloves for the person. He learned Wednesday that those gloves indeed did not go to a charity. Whoever that particular media member is sold the gloves on Ebay for $375. The winning bidder was Jason King, a Vikings fan in New Jersey.

“I was just disappointed he only tried to get $375 for them. Like he probably could’ve got way more than that,” Rudolph joked Thursday after practice about the eBay auction.

When hearing the original intent for the gloves was to go to charity, King reached out to Rudolph on Twitter and said he would gladly donate the gloves to the charity of Rudolph’s choice. They’ll be put on display at the University of Minnesota Masonic Children’s Hospital.

It’s now turned into a positive outcome, with King helping raise more than $2,000 between himself and other donors. More than $11,000 in total has been donated to Kyle Rudolph’s End Zone since the story started to unfold.

“Weird story turned into a good, this guy was just a die-hard Vikings fan in Jersey that just saw the game-used gloves for $375 and jumped on them right away. Funny story that turned out good for the hospital,” Rudolph said.

Rudolph said he’ll make sure King gets his game-used gloves as a replacement after the Vikings face the 49ers in the NFC Divisional Playoffs on Saturday.

As for the media member who requested the gloves? Rudolph said he had never seen the person before, and it wasn’t somebody Minneapolis-based that he and other Vikings’ players see throughout the season.