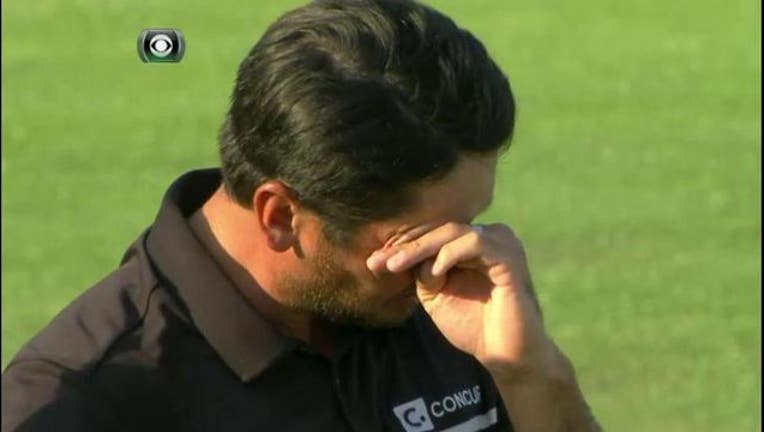 The 27-year-old Australian finished at 20-under 268 to beat Jordan Spieth by three shots. Day is the first player to finish at 20 under in a major.

Day shot 5-under 67, and never let Spieth get closer than two shots.

A nice ending to the major season for a player who has endured some close calls and his share of heartache.

At the U.S. Open in June, he fell while walking during the second round. He had vertigo symptoms. But he played through the weekend and actually held a share of the lead after 54 holes before fading on Sunday.

At the British Open, he also was in the lead after 54 holes but ended up one shot out of a playoff.

He closed the deal this time.

Earlier this week, Day said he knew if he kept putting himself in position, he'd eventually break through.

He was tearing up as he waited to hit the tap-in putt that would seal the victory. He did it, then raised both fists and buried his face in his caddie's shoulder. His son, Dash, ran to the 18th green to celebrate and Day carried him off the green. Soon, he'll cradle the Wanamaker Trophy.

Day is the fifth Aussie to win the PGA, and the first since Steve Elkington at Riviera in 1995.

One hole to go for Jason Day.

He's got a three-shot lead over Jordan Spieth at the PGA Championship.

Both players made par on No. 17 and are heading to the 18th tee box.

Day is going for his first major title.

It might be time to start engraving the Wanamaker Trophy.

Jason Day has a three-shot lead with two holes left in the PGA Championship.

The Aussie, in search of his first major title, just matched Jordan Spieth's birdie on No. 16 with one of his own. Day is at 20 under par.

If he stays steady over the last two holes, Day will get his name on the trophy.

Jason Day just made birdie on the 14th hole to reach 20 under par at the PGA Championship -- a number no player has ever finished at in a major championship.

He extended his lead over Jordan Spieth back to four shots.

Further back on the leaderboard is Dustin Johnson, at 13 under. Johnson has two eagles on the back nine, and has gone 8 under par since opening the day with a quadruple-bogey 8.

Rory McIlroy reported no discomfort with his ankle after finishing his final round at Whistling Straits.

He hurt the ankle playing soccer and hadn't played a competitive round since the U.S. Open.

He said he was pretty happy with the way the week went, considering that six weeks ago, he wasn't even able to walk.

Jordan Spieth just made a birdie putt on the 13th hole at the PGA Championship to get to 16 under.

It also makes him a cumulative 53 under par at the majors this year, tying a mark set by Tiger Woods in 2000.

Despite those impressive numbers, the reigning Masters and U.S. Open champion is still three shots behind Jason Day. Day joined Woods and Spieth as the only players to reach 19 under par in a major.

Jason Day is still going strong at the PGA Championship, and closing in on his first major title.

He's 19 under par after 12 holes -- four shots ahead of Branden Grace and Jordan Spieth.

Day joins Tiger Woods and Spieth as the only players to reach 19 under in a major.

Day teed off into a bunker on the par-3 12th and Spieth hit his tee shot pin-high, about 10 feet away. A two-shot swing looked possible but instead there was no change. Day got up and down, while Spieth's birdie putt curled off to the left at the last moment.

Justin Rose just made double bogey on 13 to fall five shots back.

Dustin Johnson started the day with a snowman.

He's been playing lights-out ever since.

Johnson has made six birdies and an eagle since his quadruple bogey 8 on the opening hole. He's at 2 under par for the round.

It's probably too late, though. He's at 11 under -- seven shots behind Jason Day.

Well, that was ugly. And pretty, too.

Jason Day chunked an approach shot from a good lie in the ninth fairway but got up and down after that to save par and make the turn with a three-shot lead at the PGA Championship.

Seeking his first major title, Day is at 18 under, three ahead of 2013 U.S. Open champion Justin Rose.

Jordan Spieth is now trailing by four after making bogey on No. 9. He is tied for third with Branden Grace, who made double bogey on No. 10 after getting caught up in heavy rough behind the green.

So far, though, this is Day's show.

The Aussie just made a 50-foot birdie putt on No. 7 to become the first player to reach 19 under at the PGA Championship since Tiger Woods in 2006. Day now has a four-shot lead over Spieth.

Tucked between them is Branden Grace at 16 under.

Unfortunately for him, those ants weren't dangerous enough.

Watson had a long discussion with a rules official after his tee shot on No. 5 landed near a pile of ants.

The rules official told him it wasn't a dangerous ant -- like a fire ant -- so he wasn't allowed to take a drop.

Watson scraped it out and made a birdie on the par-5 hole, en route to a 68.

Jordan Spieth just made bogey on No. 4 at Whistling Straits. It was his first bogey in 37 holes.

He has dropped three shots behind Jason Day and is now in third place at the PGA Championship. Branden Grace made a birdie on No. 5 to move into second at 14 under.

Just say he was channeling his inner Tiger.

Brian Gaffney, the only club pro to make the cut, said he started feeling a bit silly with his flurry of crowd-pleasing fist pumps at the PGA Championship. But he figured -- what the heck.

He doesn't play in front of crowds much, so when he got the chance, he decided to have fun with it.

Going off first in the final round, Gaffney shot 1-under 71 to finish at 5 over for the tournament.

More than respectable, and if he could have a do-over on a stretch of five holes from Saturday, where he went 5 over, it might have been even better.

He said he thought he played some good golf over the four days. Heading back to work Tuesday morning at Quaker Ridge Golf Club in Scarsdale, New York, is going to be tough, he said, because he's going to want to tell every story to everybody.

Maybe Phil Mickelson's key to success with the putter is not using it at all.

Mickelson, who missed a couple of birdie putts inside 10 feet earlier in the final round of the PGA Championship, chipped in from a greenside bunker on No. 6 for an eagle.

He is 7 under for the tournament, eight behind leader Jason Day.

Jason Day and Jordan Spieth opened the final round of the PGA Championship by hitting nearly identical drives. Both traveled 313 yards and landed in the fairway.

They hit their approach shots onto the green and two-putted for par.

Day is at 15 under, and Spieth at 13 under. The two players behind them, Justin Rose and Branden Grace, also opened with pars and are at 12 under.

Dustin Johnson is running into more bunker trouble -- and every other kind of trouble -- at Whistling Straits.

He just made an 8 to open his round, after needing three shots to get from a bunker to the first green.

The quadruple bogey dropped him to 5 under -- 10 shots behind leader Jason Day, who is about to head to the first tee box.

At the PGA at Whistling Straits in 2010, Johnson grounded his club in a bunker on the final hole and took a two-shot penalty that kept him out of a playoff.

Phil Mickelson missed two birdie putts inside of 10 feet on the second and third holes and is even par for the day.

Mickelson made a few long ones Saturday during a round of 6-under 66.

He is too far out of the lead -- 10 behind Jason Day -- to contend, but needs a strong finish to improve his ranking on the Presidents Cup list.

Spotted on the course: A band of fans handing out T-shirts that read `Spieth for President,' with a picture of the man himself, encircled by a red-white-and-blue flag logo.

If Jordan Spieth wins the PGA, he'll be the first player to capture all three U.S. majors in the same year.

Jordan Spieth is on the driving range warming up for the final round of the PGA Championship.

He's going for his third major of the season, hoping to add a victory at Whistling Straits to those from Augusta and Chambers Bay earlier this year.

If Spieth wins, this would mark the first time since 1982 that Americans swept the majors. The names back then: Craig Stadler (Masters), Tom Watson (U.S. and British Open) and Raymond Floyd (PGA).

Spieth needs to overcome a two-shot deficit against Jason Day, the Australian who is trying to win his first major after a number of close calls.

The final round of the final major of the year is under way.

Teeing off early Sunday, Ryan Moore made six birdies and played the front nine in 6-under 30.

Kevin Chappell is 4 under for the day through 12 holes.

Thirty of the 77 players shot rounds in the 60s on Saturday.

That included Branden Grace, who shot 64 to move into third place, three shots behind leader Jason Day, who shot 66 to head into the final round at 15 under.

Jordan Spieth shot 30 on the back nine to pull within two of Day.

Spieth and Day tee off in the last twosome this afternoon.