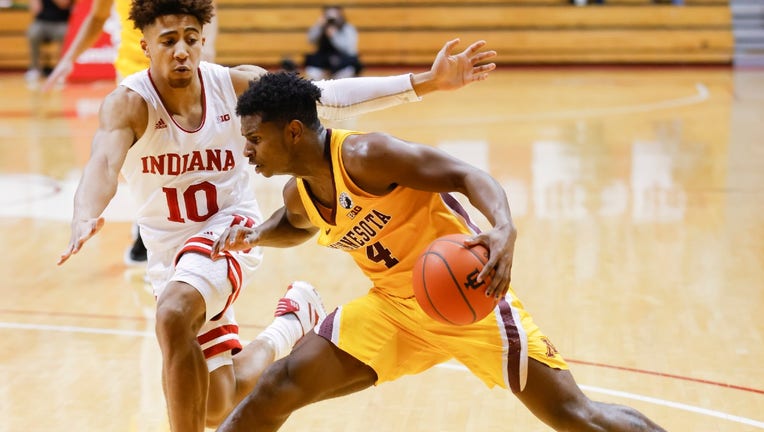 Jamal Mashburn Jr. #4 of the Minnesota Golden Gophers drives to the basket against Rob Phinisee #10 of the Indiana Hoosiers during the second half at Assembly Hall on February 17, 2021 in Bloomington, Indiana. ((Photo by Michael Hickey/Getty Images))

MINNEAPOLIS - The University of Minnesota men’s basketball team needs a new coach, and the roster will likely look at lot different in the 2021-22 season.

The Gophers learned Wednesday they’ll be without their top freshman player from this season, as guard Jamal Mashburn Jr. has entered the NCAA transfer portal. Mashburn was the top recruit in Richard Pitino’s 2020 class. He averaged 8.2 points per game and played 22.7 minutes in his first season. He played all 29 games and got eight starts after Gabe Kalscheur went down with a broken finger in his shooting hand.

Pitino made Mashburn his top recruiting priority for last season. Now that Pitino has been dismissed and is the new head coach at New Mexico, Mashburn will leave the program after one season and pursue other opportunities.

His departure makes the Gophers’ backcourt uncertain for next season. Marcus Carr was a Third Team All-Big Ten pick this season and led the Gophers in scoring. He put his name in the NBA Draft process after last season, and it’s unlikely he will return next year.

The Gophers will also be without forward Jarvis Omersa next year. Omersa played in seven games this year before opting out of the season due to COVID-19 concerns. He entered the transfer portal earlier this week.