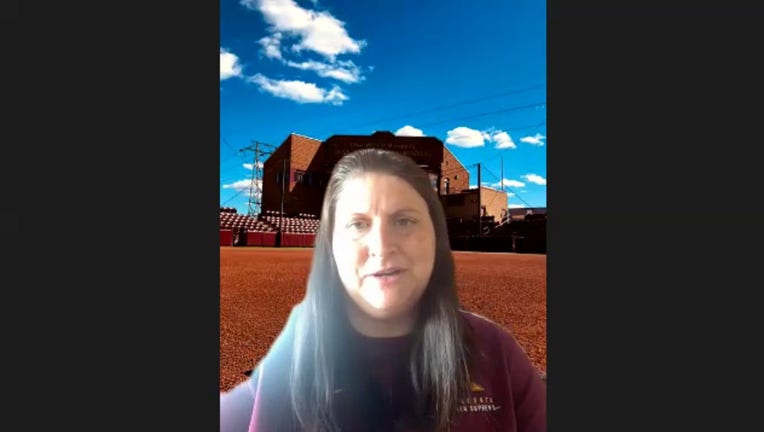 Piper Ritter spoke with reporters on Monday for the first time since being named the new Minnesota softball coach.

MINNEAPOLIS - The face of the University of Minnesota softball team might be changing, but the goals and the expectations of the program certainly are not.

That was the message from Piper Ritter as she addressed reporters Monday morning for the first time since being named the Gophers softball coach. She replaces Jamie Trachsel, who departed for the head coaching job at Ole Miss, and Ritter hopes familiarity breeds comfort and confidence.

The team was coming off its first College World Series appearance in 2019, and had started 15-9-1 before the NCAA canceled the spring sports season across the country due to the Coronavrius pandemic. After a Zoom meeting with Athletic Director Mark Coyle, the timing was right for Ritter, a former Gophers’ star pitcher, to be the program’s next head coach.

“I always think it was this program. To be honest I’ve never really ever thought about leaving and going to coach anywhere else,” Ritter said. “I worked to get it, it’s always been this program. I can’t even see myself coaching in a different color.”

Ritter was a four-time All-Big Ten selection in her playing days for the Gophers. She was a first team all-league selection in 2003, posting 11 shut outs and 311 strikeouts, a school record at the time. She helped lead Minnesota to the NCAA Regional Tournament in 2002 and 2003.

Coyle didn't have to look far to find his next softball coach.

"I am excited for the future of our softball program," Coyle said in a statement. "Piper has been part of our team for nearly two decades, and she is the right person for the job. She was one of the best players ever to wear the Maroon and Gold and consistently developed All-American talent as an assistant coach. Her dedication to Minnesota, meticulous work ethic and attention to detail will serve her well as she makes the transition to head coach."

If there’s anyone who knows how the Gophers can win, it’s Ritter. She’s coached four of the five career strikeout leaders at Minnesota, while she herself as in the fifth spot. She’s also coached the top two pitchers in win total. She’s No. 3 all-time for the Gophers.

"What a great day for Minnesota softball. Piper Ritter is widely regarded as one of the best pitching coaches in the game.” said Allister, now the coach at Stanford. “The steady stream of All-American pitchers she has produced over the past seven years speaks for itself. Gopher softball is in great hands!"

Her coaching philosophy circles around dominant pitching, and being strong at the plate.

“I’m passionate about pitching, and I’ve seen how successful hitting can be. Hitting and pitching are a really important part of this game. I want us to be excellent in everything we do,” Ritter said.

There shouldn’t be much of a transition for the current team, with Ritter having previous coaching and playing experience with the Gophers. They know what’s expected of them, and the familiarity should help the program going forward.

Ritter doesn’t know what a life outside Gophers softball would look like. She devoted four years to playing for Minnesota, and another 11 as an assistant coach.

What’s changed now is it’s the right time for her to take over the program she knows like the perfect rise ball. She didn’t have the experience at previous times when the head spot was open, and was a new mother when Trachsel took over.

The Gophers softball team has a new face in charge, but that’s about all that’s changing.

“I get to go out and recruit student athletes, and I get to tell them why it’s awesome to wear Maroon and Gold, what classes are the coolest ones to take on campus, that doesn’t change for me. When I’m telling people why it’s great to be in Minnesota and great to be on this softball field, nothing is changed in that role,” Ritter said. “The difference is now I get to shape it a lot more and construct it exactly how I want it.”