The Cleveland Browns and Denver Broncos are battling injuries, but they will try to break into the win column in Thursday Night Football on FOX.

CLEVELAND - The Denver Broncos and Cleveland Browns put on playoff games for the ages in the late 1980s, and the stakes for Thursday night’s game could rival that must-win feel.

The Browns will welcome the Broncos to FirstEnergy Stadium on Thursday, ushering in Week 7 of this NFL season.

Playoff contenders usually separate themselves from the pack at this point of the season. But neither team finds itself with a winning record. Both squads are 3-3. And with both teams plagued by injuries, a fourth win will be hard to come by Thursday.

The Browns will be without starting quarterback Baker Mayfield. The former Heisman Trophy winner has battled shoulder dislocations this season. 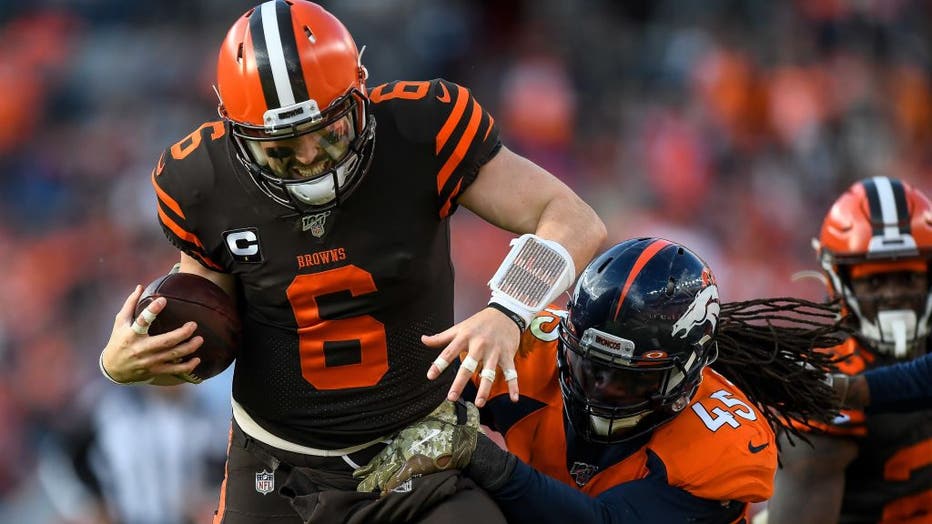 Baker Mayfield is hit by A.J. Johnson in the second quarter of a game at Empower Field at Mile High on Nov. 3, 2019 in Denver, Colorado. (Photo by Dustin Bradford/Getty Images)

Backup quarterback Case Keenum, the former Bronco, will start in his stead. Coaches usually supplement the absence of their quarterback by focusing on the run game, but the Browns will also be down two backs.

Runningbacks Nick Chub and Kareem Hunt are out with calf injuries. And even if they were playing, they’d be running behind an offensive line that’s missing starting tackles Jack Conklin (knee) and Jedrick Wills Jr. (ankle).

As for the Broncos, starting quarterback Teddy Bridgewater will be playing, but don’t be surprised to see him limping at some point. He’s nursing quadriceps issues as well as a foot injury that occurred in Sunday’s loss to the Las Vegas Raiders when guard Graham Glasgow stepped on his foot.

The Raiders also punished Bridgewater, hitting him 17 times, sacking him five times and forced three interceptions. The physical demands of preparing and recovering on a short week, could make this a difficult game for both injury-laden offenses.