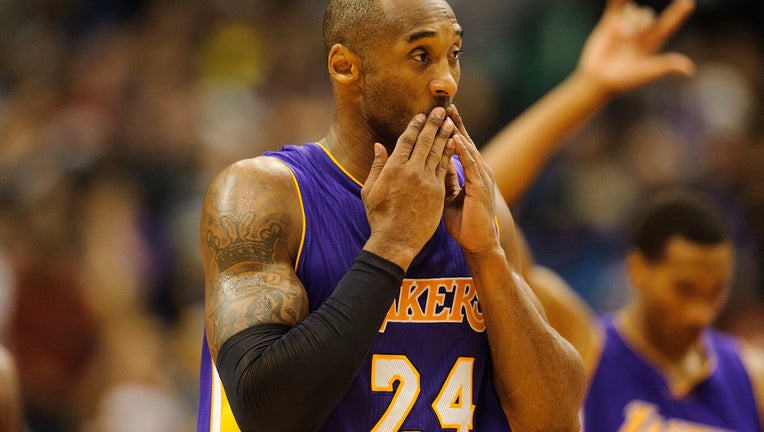 Kobe Bryant #24 of the Los Angeles Lakers looks on during the fourth quarter of the game against the Minnesota Timberwolves on December 14, 2014 at Target Center in Minneapolis, Minnesota. The Lakers defeated the Timberwolves 100-94. ( Hannah Foslien )

MINNEAPOLIS (FOX 9) - The death of basketball star Kobe Bryant is being felt across the globe including in Minnesota.

Bryant and his 13-year-old daughter Gianna were reportedly among nine people killed when a helicopter went down in California on Sunday.

The loss of a legend has left a wake among basketball fans and players.

The Minnesota Timberwolves issued a statement memorializing Bryant. It reads in part: "His immense presence was felt not only on the court but off the court as a husband, father, mentor, and entrepreneur."

The team followed up with another tweet with a photo of Bryant playing in Minneapolis with the caption "Mamba Forever," a reference to his nickname, the Black Mamba.

Timberwolves players were also struck with grief by the loss of a basketball idol.

"This one hurt! RIP legend! Thank you for your legacy #kobe," rookie Jarrett Culver added.

The news of Bryant's death came as the Gophers tipped off on a Sunday afternoon game at home versus Michigan State. After the game, Gophers coach Richard Pitino acknowledged the impact Bryant's death has had on the team.

"It's devastating, it really is," said Pitino. "For whatever reason, it just feels like it hits home, our guys are pretty rocked by it."

Diggs also shared a clip from 2017 showing him honoring Bryant, who had retired the year before. In the clip, Diggs wore Kobe-themed cleats and mimed a fadeaway jumper, Kobe’s signature shot, during a touchdown celebration.

The death of basketball star Kobe Bryant is being felt across the globe and in Minnesota.

"So sad to hear of Kobe’s passing," wrote Cousins. "We lost a legend. Praying for his family, friends and all of his fans. I believe his Mamba mentality will live on with all those he inspired."