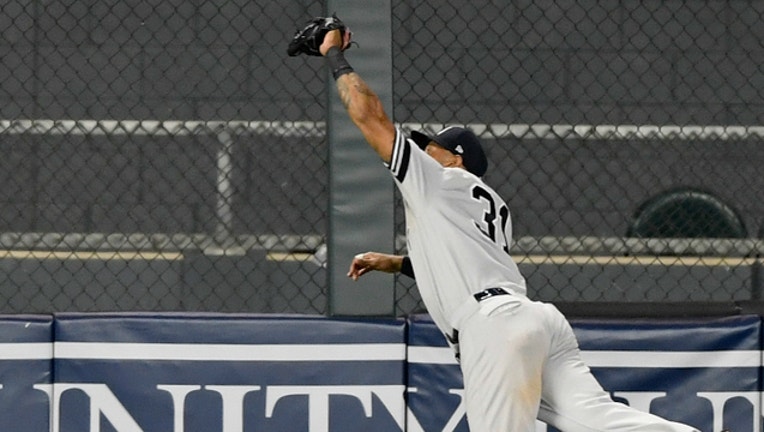 MINNEAPOLIS, MN - JULY 23: Aaron Hicks #31 of the New York Yankees makes a catch in center field of the ball hit by Max Kepler #26 of the Minnesota Twins during the tenth inning to end the game. (Photo by Hannah Foslien/Getty Images)

MINNEAPOLIS (AP) - After the Yankees and Twins pummeled each other's relievers with one big swing after another, New York center fielder Aaron Hicks dashed and dived for an unforgettable catch to finally end a most memorable game.

Hicks made a game-saving grab for the final out in the 10th inning, Didi Gregorius had five hits and seven RBIs, and New York beat Minnesota 14-12 Tuesday night in a game that featured five lead changes or ties in the final three innings.

"That's one of those games that, for being late July, we'll probably be talking about for a long time," Yankees manager Aaron Boone said.

Gleyber Torres scored Gregorius with an RBI single in the top of the 10th and New York tacked on another run on a wild pitch by Kohl Stewart (2-2). The two-run lead only stood thanks to Hicks' all-out effort a half-inning later.

Yankees reliever Adam Ottavino walked the bases loaded with two outs, and then Chad Green allowed a drive to Max Kepler into the left-center field gap. Hicks ran it down and caught it with a sprawling, backhanded effort at the warning track, ending the game after 5 hours, 3 minutes.

It was the fastest Hicks has run all season on an out he's recorded, per Statcast.

"That was a do-or-die play," Hicks said. "That was a play that needed to be made in order for the game to end."

The Twins were ready to celebrate another late-inning win off the bat of Kepler, who has driven in the winning run in the team's two walkoff wins this year, including Sunday's victory against Oakland.

"It can be an emotional rollercoaster if you let them get to you," Kepler said. "But it's baseball, it's unpredictable. Main thing is we battled and that's what we've been doing. Keep doing that."

The madness began with New York's five-run eighth inning for a 10-9 lead. Mike Tauchman had an RBI double, then Judge and Gregorius added two-run doubles. The inning ended when Gary Sánchez grounded out and was pulled with a groin injury.

Aroldis Chapman (3-2) earned the win after blowing his third save in six appearances and his sixth of the season in the ninth inning. He walked the first three batters, and Ehire Adrianza scored a tying run on Jorge Polanco's sacrifice fly.

"I don't think we could be, again, prouder of the effort we get from our players," Twins manager Rocco Baldelli said. "Our players do not quit. They never quit. They continued to do whatever they have to do to win and put ourselves in position to win, and it feels really good knowing that and showing up every day with these guys."

Miguel Sanó hit his second homer of the game in the eighth off Zack Britton to put Minnesota ahead 11-10. Hicks followed with a two-run homer in the top of the ninth off closer Taylor Rogers, who blew his second save in three games and fifth of the season.

Jorge Polanco and Nelson Cruz hit back-to-back home runs for the second straight game in the third. Minnesota has hit nine homers in the first two games of the series.

Gregorius hit the 100th homer of his career. His five hits were a career high, and the seven RBIs fell one short of his best, which came against Tampa Bay in 2018.

Green got his first save of the season.

Baldelli and hitting coach James Rowson were both ejected for arguing strike calls by home plate umpire Ramon De Jesus. Baldelli's ejection was the second of his rookie season as manager.

"There were two times where I thought the inning was over and I feel pretty confident about what I saw," Baldelli said of his ejection in the eighth. "And the inning ended up going on. And the Yankees ended up scoring because of it. Our players, that's what I'm talking about when I say our players earned something, did their part. They did their jobs. So that's what's frustrating about the whole thing."

Yankees: Boone said Sánchez will undergo further examination but a trip to the injured list is a possibility. .... OF Brett Gardner was out of the lineup for the third straight game with a sore left knee. Boone said Gardner was available late in the game, but he did not play. ... OF Cameron Maybin started his rehab assignment from a left calf strain as the designated hitter for Triple-A Scranton/Wilkes-Barre. Maybin went 4 for 5 with a home run.

Twins: OF Byron Buxton remains on the injured list for concussion-like symptoms, and Baldelli said Buxton also had three teeth pulled within the past week. Baldelli said he still anticipates a return for Buxton soon.

Twins: Jake Odorizzi (11-4, 3.06) will try to beat the Yankees for the second time this season. The All-Star right-hander gave up just two hits in six scoreless innings at New York on May 4, but he's allowed 20 earned runs over his past 28 2/3 innings.