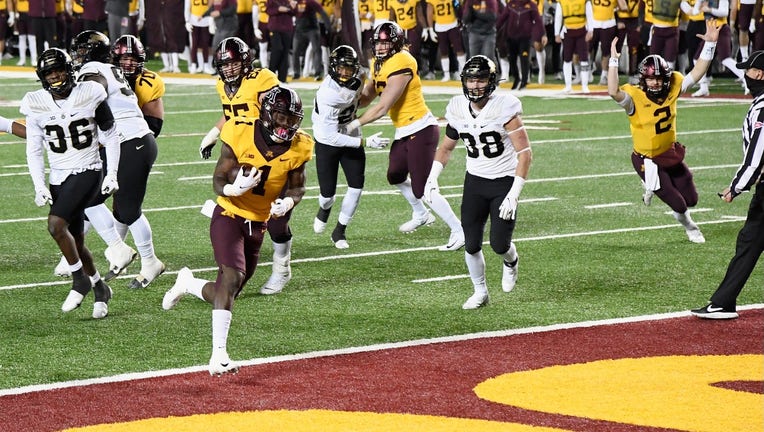 Cam Wiley #1 of the Minnesota Golden Gophers scores a touchdown against the Purdue Boilermakers during the first quarter of the game at TCF Bank Stadium on November 20, 2020 in Minneapolis, Minnesota.  ((Photo by Hannah Foslien/Getty Images))

Wiley, a redshirt sophomore, had just six carries for four yards in three games this season. In 2020, Wiley had 29 carries for 179 yards and one touchdown in seven games. With Mo Ibrahim and Trey Potts out for the season with injuries, PJ Fleck has opted to turn to a combination of Bryce Williams, Mar’Keise Irving and Ky Thomas in the run game.

Wiley announced his departure on social media, and thanked Minnesota before his exit. It’s the second transfer in as many weeks for Fleck and the Gophers. Last week, offensive lineman Curtis Dunlap Jr. announced he was leaving the program.

Fleck was asked about Wiley at his weekly news conference on Monday. He said part of the decision was the Las Vegas native wanted to be closer to home.

"Cam Wiley is an awesome young man and I’m sad to see him go, but there are some reasons why he wanted to go and get closer to home and his family and I wish him all the best and support him 100 percent. The portal is designed for the young players to have opportunities that fit them really well," Fleck said. "I support it 100 percent. I’m going to miss him, he’s a really good person and I had a wonderful talk with him and we wish him all the best."

Wiley played in Saturday’s win over Nebraska, but did not get a rushing attempt. Williams led the Gophers with 17 carries for 127 yards, including a 56-yard touchdown in the fourth quarter. Thomas and Irving each had seven carries, for a combined yards.

Wiley did not play against Bowling Green, Colorado or Purdue.

The Gophers look for their third straight win against Maryland on Saturday at Huntington Bank Stadium.