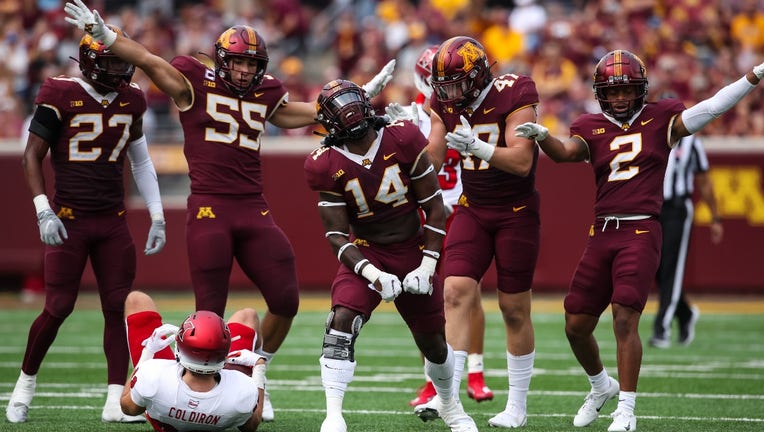 MINNEAPOLIS - When the University of Minnesota hired PJ Fleck as its football coach in 2017, he brought his "Row the Boat" mantra to the Gophers.

It’s main message is about overcoming adversity, and nobody might know that path better than linebacker Braelin Oliver. He missed the entire 2020 season with a knee injury that spring that might end most football careers. Oliver tore his LCL, ACL, hamstring, dislocated his knee and had nerve damage going down his leg in the aftermath. He still deals with foot drop, a condition that makes it difficult to lift the foot after such an injury.

Gophers linebacker Braelin Oliver talked Monday about a major knee injury in the spring of 2020 that forced him to miss a year of football.

"That injury, it was a dark time so it really was just a lot of thinking. I really felt like I wasn’t there to help them physically, but I was there spiritually and mentally. That kind of pushed me to when I come back, I’ve got to give it everything I’ve got because I missed a whole year without the team. That really hurt me to not be on the field out there with them," Oliver said after Monday’s fall camp practice.

Oliver wouldn’t let it be the end to his story. He returned last season and played all 13 games, with seven starts, and had 24 tackles with one pass break-up and a forced fumble. He played behind Mariano Sori-Marin and Jack Gibbens among the linebackers.

He’s now a primary linebacker on the first-team defense, playing alongside Sori-Marin.

"The reality is when that thing happened and you get information from medical people, that wasn’t necessarily a slam dunk that that was going to be one that you come back," defensive coordinator Joe Rossi said. "He persevered, he rehabbed. What I’ve seen from him this training camp, he’s full speed."

Oliver said he felt some nerves going into last season, and didn’t fully feel like himself until Minnesota hosted Nebraska, a 30-23 win at Huntington Bank Stadium. He had worn a brace on his right knee the first five games of the season. He took it off in practice in the week leading up to facing the Cornhuskers, and made one tackle in the victory.

It was the last mental hurdle he had to clear.

Rossi has watched him mature through it all, and now grow into one of the veteran defensive leaders. The hope is he works his way back to the explosive player he was in 2019, making 22 tackles and getting three sacks as a freshman.

"I’m just super proud of him as a person because I’ve coached him for a while and he’s been up and down at times. He’s through that, and he’s really matured," Rossi said. "You take some of the flashes that you’ve seen early in his career with making plays, now you combine it with the detail and the execution of the defense, and we’re excited for him. Just super pleased with where he’s at right now."

Wide receiver Daniel Jackson did not practice, but was out of a walking boot for the first time since fall camp started.

It was an up-and-down day for Tanner Morgan, who hit Chris Autman-Bell and Michael Brown-Stephens for completions over the middle during the same team situation. Later on during a 7-on-7 drill, Morgan was sacked, then had consecutive incompletions before Tyler Nubin got an interception, jumping a Dylan Wright route, and running it back for a touchdown with his defense celebrating in the background.

Athan Kaliakmanis hit Wright for a pair of completions, and Clay Geary for a long gain. In a red zone situation, Cole Kramer hit Ike White in the corner of the end zone for a touchdown. White made a leaping one-handed catch over multiple defenders.

"We’ve still got a long way to go. We’ve got to get a lot better before we kick off Sept. 1, but this group is definitely committed and we’ve got a lot of guys that can make plays," Morgan said.