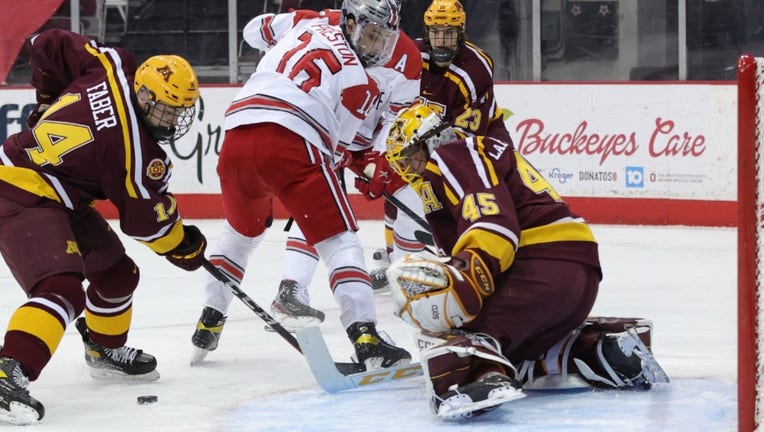 MINNEAPOLIS - The University of Minnesota men’s hockey team is playing for a Big Ten title Tuesday night, and the Gophers had several players earn honors from the league.

Jack LaFontaine, a finalist for the Mike Richter Award and a candidate for the Hobey Baker Award, was named the Big Ten Goaltender of the Year. He’s one of three Gophers to earn First Team All-Big Ten honors, joining Sampo Ranta and Jackson LaCombe.

LaFontaine is one of the top goalies in the NCAA this year and leads the nation with 20 wins. He’s also tied for the lead with a .937 save percentage, and is second in the country with a 1.65 goals against average. He’s second in the nation with five shutouts on the season. He’s allowed two or fewere goals in 26 of his last 30 starts.

Ranta is tied for second in the nation with 18 goals, leading the Gophers in goals and in points with 28. Both figures are career-highs. The Gophers are 18-3 when Ranta gets on the scoresheet, and they’re 7-0 when he has a multi-point game. LaCombe has a career-high 18 points, with four goals and 14 assists. He’s second among Big Ten defenseman in scoring, and tied for 10th nationally.