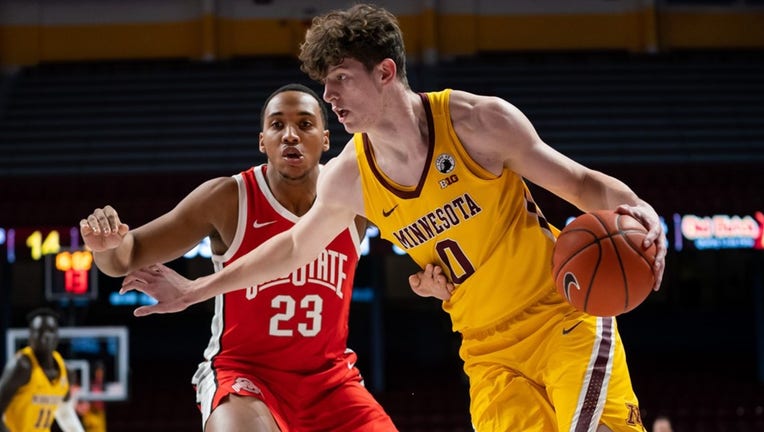 MINNEAPOLIS - A three-day break might have come at the perfect time for the University of Minnesota basketball team.

The No. 23-ranked Gophers got three days off after an 86-71 loss at Iowa last Sunday, their third loss in the last four games. They returned to practice on Thursday, and finish the toughest stretch in the history of the program on Saturday, hosting No. 7-ranked Michigan at Williams Arena.

Playing during the COVID-19 pandemic, it was time for the players and coaches to get a physical and mental break after eight games in 25 days.

"It’s just not normal. The No. 1 thing we needed to do was get away, recharge and then yesterday we had a terrific practice. We had energy, we had spirit and we got better," Gophers coach Richard Pitino said Friday.

Maybe nobody needed the break more than guard Marcus Carr. He leads the Gophers in minutes played, averaging 35.6 per game, and in scoring at 20.9 points per game.

"It was good definitely to have a little break. It allowed us to regroup and come back to practice with a fresh mind," Carr said.

It’s hard to truly grasp the difficulty of Minnesota’s schedule until you actually look at the numbers. Starting with the Big Ten opener at Illinois, the Gophers will have played nine straight games against top 25 opponents after hosting the Wolverines on Saturday.

That includes five games against top 10 teams in Iowa, Michigan and Wisconsin. Illinois is now No. 14 and was in the top 10 when they played the Gophers, Ohio State is ranked No. 21 and Michigan State was ranked No. 17 when they faced Minnesota. St. Louis, who the Gophers beat after losing at Illinois, is now ranked right behind Minnesota at No. 24.

The Gophers’ have never had a tougher stretch in the history of their program, and it’s the toughest in college basketball since 2011. It’s kept Pitino up at night, and if the Gophers can beat the Wolverines Saturday, they’ll finish the stretch 5-4.

"I’ve never seen anything like it. I was tossing and turning last night in sleep and I was looking at my phone looking at how many games that we’ve played that have been really challenging, and we’ve responded very well," Pitino said.

Not having fans at Williams Arena hasn’t slowed the Gophers this season. Minnesota is 10-0 at home, including a gritty win over St. Louis, taking down Iowa in overtime and blowing out Michigan State and Ohio State.

It’s on the road where the Gophers are having issues. They’re 0-4 away from The Barn, and those losses are by an average of nearly 20 points per game. They got within five points at Iowa with 5:30 to play, but the Hawkeyes ended the game on an 18-8 run.

"Every team we’ve played on the road is in the top 15. They’re just really good teams and we’ve struggled a little bit," said Robbins, who leads the Big Ten in blocked shots. "We need to put together a full 40 minutes against some of these elite teams. We can’t let it get to a 16 or 17-point lead to where we have to work really hard just to get back in the game."

The luxury for the Gophers is they get another crack at Michigan, but this time at home. But the Wolverines are playing as well as anybody in the country right now. They’re atop the Big Ten at 11-0, 6-0 in the conference, and blew out Wisconsin 77-54 last Saturday.

The Gophers trailed the Wolverines 39-37 at half nine days ago, then got out-scored 50-31 in the second half.

"We’ve shown if you want to push us around and set the rules, we’ve got to respond better. We’ve got try to knock them off their path because they’ve been kind of undeterred, and we’ve got to be able to fight back. They’re really good, I don’t think they have a weakness," Pitino said.