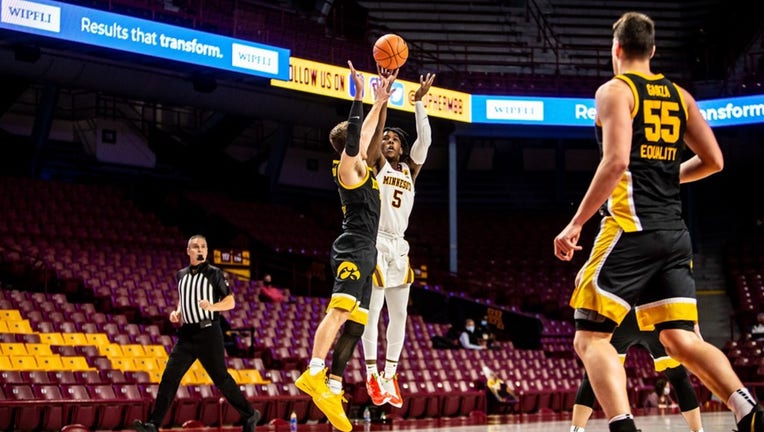 MINNEAPOLIS - The University of Minnesota men’s basketball team fell four spots to No. 21 in this week’s Associated Press top 25 poll after Saturday’s loss to Maryland at Williams Arena.

The Gophers shot just 30 percent from the field, 5-of-23 from three-point range and scored a season-low 49 points in the loss. Marcus Carr finished with 25 points on 8-of-14 shooting, but the rest of the team shot a combined 6-of-32 from the field.

The Gophers were alos ranked No. 20 in the USA Today Coaches Poll, and are ranked in the top 25 for the sixth straight week.

Also on Monday, Carr was named a top-10 finalist for the Bob Cousy Point Guard of the Year Award. The honor goes out annually to the top point guard in the country.

Carr is third in the Big Ten in scoring at 20.9 points per game, second with 5.2 assists per game and is seventh in three-point field goals made per game with 2.3. He leads the Big Ten in minutes played at 35.9 per game.

Carr was also named to the top 25 midseason watch list for the John R. Wooden Award, which goes annually to the top player in college basketball.

Carr is one of three players with Minnesota connections to be named a top-10 finalist for the Bob Cousy Award. The others are Colorado guard and former Champlin Park star McKinley Wright, and Gonzaga guard Jalen Suggs, who starred at Minnehaha Academy.

The Gophers are back in action Saturday night at Purdue.