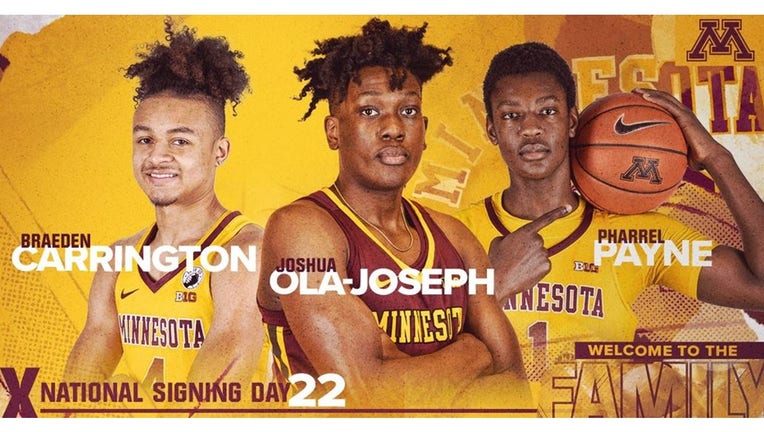 MINNEAPOLIS - A day after getting his first career win as a Division I head coach, Ben Johnson signed three players to the University of Minnesota men’s basketball program in his first recruiting class.

Minnesota natives Braeden Carrington, Pharrel Payne and Joshua Ola-Joseph all signed national letters of intent Wednesday to play for Johnson and the Gophers next season.

"I think we hit a home run in this first recruiting class," Johnson said in a statement. "These are three young men that we targeted early and felt they fit every need within our program. We're ecstatic to land these three kids and are everything our program stands for athletically, academically and socially. They are a talented group that will help us be competitive in the Big Ten."

Carrington is a 6-4, 170-pount guard from Brooklyn Park who is a standout at Park Center. He averaged 18.1 points per game last season, scoring double figures in 15 of 19 games, with four 30-point performances. He led the Pirates to a 16-5 record. Carrington is a consensus top-150 recruit. Carrington was the first high school prospect to commit to Johnson and the Gophers.

Ola-Joseph is a 6-6, 200-pound forward out of Osseo who averaged 16.7 points, 6.7 rebounds, two assists and three blocks per game last season for the Orioles. Ola-Joseph scored in double figures in 18 of 20 games, and had five games with at least 20 points.

Payne is a 6-9, 230-pound forward out of Cottage Grove. He averaged 15 points and 10 rebounds per game last season and had a breakout summer on the AAU circuit. Payne is Minnesota’s highest-ranked signee at No. 83 nationally.