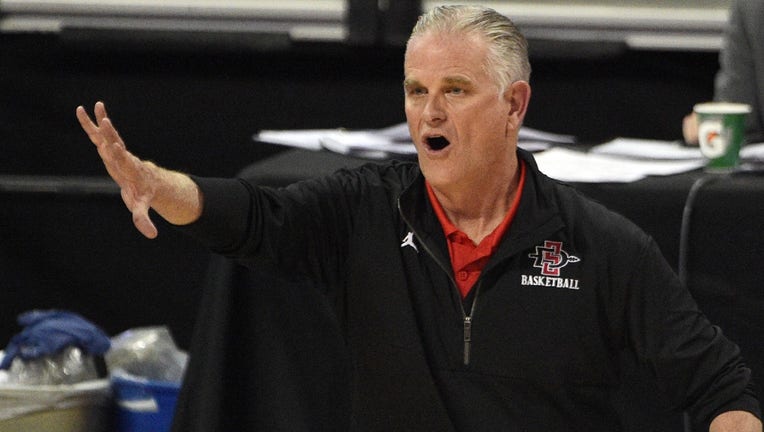 Head coach Brian Dutcher of the San Diego State Aztecs gives instructions during the championship game against the Utah State Aggies in the Mountain West Conference basketball tournament at the Thomas & Mack Center on March 13, 2021 in Las Vegas, ((Photo by David Becker/Getty Images))

By now, we know the numbers for Pitino’s time with the Gophers. He went 54-94 in Big Ten play, including 6-14 this season. He led the Gophers to two NCAA Tournament appearances, and one victory. It was time for a change.

So who will be the next Gophers coach? Here are five names to watch.

If you want Minnesota ties for the next coach. Eric Musselman will be a popular name. He’s currently at the University of Arkansas and has the Razorbacks as a No. 3 seed for the NCAA Tournament. He’s a Minneapolis native, and his dad, Bill Musselman, coached both the Timberwolves and Gophers. The problem? He’s on the verge of a contract extension, and his current contract buyout until April 30 is $5 million. May 1, it drops to $1.5 million. It’s a call you have to make, even if it’s a long shot.

Brian Dutcher is another popular name for Gophers fans with Minnesota ties. His father, Jim Dutcher, was the last Gophers’ coach to win a Big Ten title that counted in 1982. Brian Dutcher is currently at San Diego State and has the Aztecs in the NCAA Tournament after a 23-4 season, winning the Mountain West Conference. He has a clause in his contract for a $1 million buyout in the event he takes the Minnesota job. His father still lives in the Twin Cities, and it’s a feasible option for the 61-year-old if Coyle makes the call.

Dennis Gates is one of the hot young names in college basketball coaching, and he has Cleveland State in the NCAA Tournament after inheriting a mess in 2019. Coyle wants an extensive and diverse coaching search, and Gates is African-American. He’s also a relentless recruiter, and has Cleveland State dancing after just two seasons.

Craig Smith is another popular name in the college coaching circles, and he’s a Minnesota native. Smith is at Utah State after spending four years at South Dakota, and has the Aggies in the NCAA Tournament. He’s led Utah State to three straight 20-plus win seasons, including a 15-4 mark in the Mountain West this year.

Niko Medved is yet another name with Minnesota ties. The Minneapolis native was a student manager for Clem Haskins, and was an assistant for Dan Monson. He’s now the head coach at Colorado State, and one of his assistants is former DeLaSalle legend Dave Thorson. If the two came to the Gophers, it would be a game-changer for in-state recruiting. He’s 50-38 through three seasons at Colorado State, and they’re in the NIT this year.