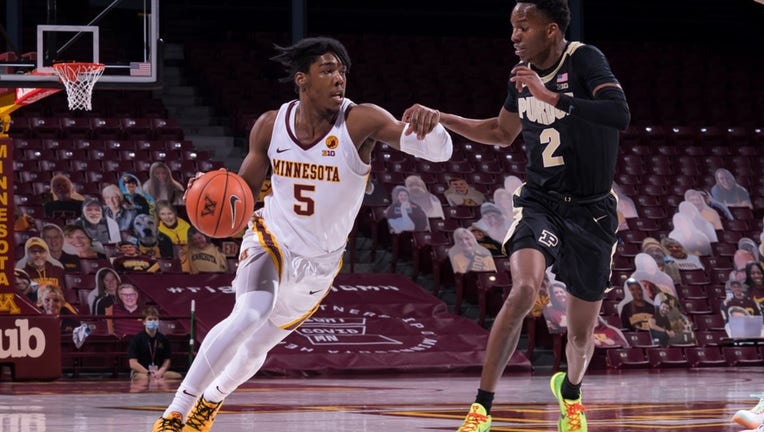 MINNEAPOLIS - The University of Minnesota men’s basketball team finds itself in a tough spot with four regular season games left to play.

The Gophers (13-10, 6-10) are on a three-game losing streak, their fighting for the NCAA Tournament lives and they’re not healthy. Gabe Kalscheur is out at least a few more weeks, Liam Robbins is gutting through a bad ankle and Marcus Carr and Both Gach are each playing through injuries.

It’s not an ideal scenario as Minnesota starts its final four-game stretch against Northwestern Thursday night at Williams Arena.

"Getting hit at the wrong time for sure. Any time you take influential players out of your starting lineup, it’s a big deal in the middle of the season. Your world is rocked a little bit," Gophers coach Richard Pitino said Wednesday.

Pitino said on his weekly radio show his team is limiting its practice time, and they’re not going 5-on-5 because they don’t have enough healthy bodies. Robbins is not practicing at all, and played just 13 minutes in Saturday’s 94-63 loss to Illinois.

The Gophers also missed Kalscheur, not only for his shooting despite struggles this season, but his ability to shut down an opponent’s top guard. Without him, Ayo Dosunmo had a triple-double against the Gophers. Without Kalscheur and Robbins, Illinois out-scored Minnesota 48-20 in the paint, the Gophers committed 18 turnovers and the Illini scored 31 fast break points.

"It feels like a new team. When you take two influential important players out of your lineup, it’s going to change the team," Pitino said.

Next up is Northwestern Thursday night at Williams Arena. The Wildcats are 3-13 in the Big Ten, having lost 13 straight games after opening the conference 3-0 with wins over Indiana, Ohio State and Michigan State. It’s a game the Gophers have to have, one of their last two at home, if they have intentions of their name being called on Selection Sunday.

Minnesota’s luxury, if you want to call it that, is that the last four games are against teams all below .500 in the Big Ten. Rutgers is 8-9, and Penn State, Northwestern and Nebraska are the bottom three teams in the Big Ten. The Gophers are currently 11th in the Big Ten at 6-10.

They can’t finish above .500 in the league, but they can finish strong and solidify an NCAA Tournament bid with two or three wins before the Big Ten Tournament.

"The NCAA Tournament is obviously our biggest goal, but taking care of the games in front of us is more important. We need to get all four of these, so that’s the main focus at the moment," guard Tre Williams said.

With Kalscheur out, Robbins hobbling and Carr and Gach dealing with ailments, it’ll be on players like Mashburn, Williams, Isaiah Ihnen, Brandon Johnson and Eric Curry to be productive in their time on the court.

The first and top priority is Northwestern. The Wildcats are 1-8 on the road this season. The Gophers are 13-2 at Williams Arena.

There’s no more room for error. The Gophers know what’s at stake, they have four games over the next two weeks to finalize their resume and feel good about the NCAA Tournament before heading to Indianapolis for the Big Ten Tournament.

They have at least five quality wins, now they just need a strong finish.

"Every game that you play this time of year, if you’re in the hunt for an NCAA Tournament berth, can help you. Northwestern is capable of beating anybody. It’s that time of the year where the games matter, and I think our guys understand that," Pitino said. "Go out there and compete your butts off, leave it all out on the floor."