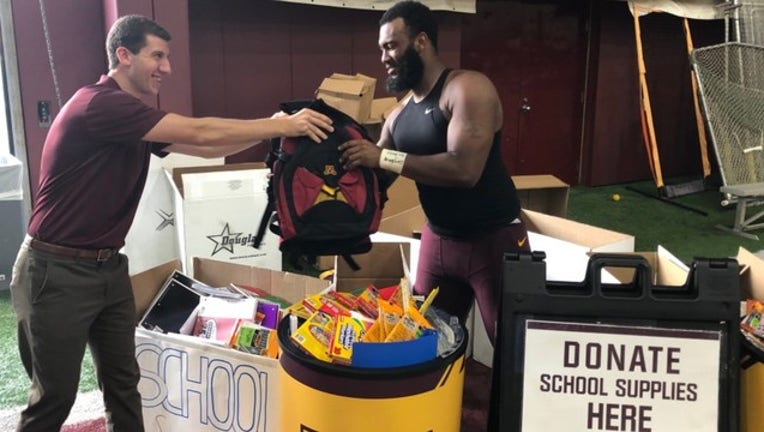 Gophers senior defensive end Winston DeLattiboudere organized a drive to collect school supplies for Twin Cities schools on Friday at the team's fall practice, which was open to the public.

MINNEAPOLIS (FOX 9) - Under PJ Fleck, one of the main missions for the University of Minnesota football team is serving and giving.

Each player does it in their own way between public speaking opportunities, hospital visits and charity work. Nowhere was it more evident than Friday at the Gophers' open football practice on campus, less than two weeks before their season-opener against South Dakota State.

While players and coaches grinded through individual drills, game situations and 11-on-11 drills, fifth-year senior Winston DeLattiboudere had cans lined up for a school supply drive. He practiced his work at defensive end while Gopher fans filing into watch Friday's open practice filled those cans with supplies for kids who need it this coming school year, which is now just around the corner.

Items brought to practice included notebooks, paper, pens and pencils. DeLattiboudere admitted himself he was a little distracted at Friday's practice.

"Everybody was so excited to bring in school supplies, and that kind of delighted my heart. I'm doing my best to stay focused in practice, but I see people like lugging in school supplies and stuff like that. It was beautiful," DeLattiboudere said. "That made my heart warm, being able to see everybody bringing stuff in."

The supplies will go both to the Hmong International School in Minneapolis, where DeLattiboudere frequently volunteers, and at the Rock Primary School in Jamaica, where he has family connections. Hundreds of fans came to watch the Gophers with the first game 13 days away, and they made sure those bins were full.

The serving and giving is one of the main reasons why he's on the watch list for the Wuerffel Trophy. Named for former Florida quarterback Danny Wuerffel, the award is college football's premiere trophy for community service. It's given to an FBS player who best exemplifies community service with athletic and academic achievement.

"It's also motivation that there's always more work to be done in the community with the youth. We have such a beautiful platform, being at a university like this playing college football, I feel like it would be kind of doing yourself a disservice not to give back to the community," DeLattiboudere said.

A three-year starter at defensive end, DeLattiboudere has spent more than 65 documented hours in Twin Cities schools, leading speaking and reading sessions. The Baltimore native, currently studying Youth Development Leadership, is spending his senior year working on a school supply project, which will send those supplies to both schools both local and to family connections in Jamaica.

On the field, DeLattiboudere has played all 38 games his last three seasons with the Gophers. He has 53 career tackles, 11.5 tackles for a loss, 4.5 sacks and two forced fumbles.

"He's one of the realest human beings you will ever meet and he deserves everything that comes his way," Fleck said.

In addition to the drive at Friday's practice, the Gophers hosted a diaper drive at an open practice earlier in fall camp.

It's all part of an initiative that shows life is about more than football.

"We promote to our players all the time about serving and giving. We'd love every single one our players to create their own non-profit by the time they get out of here. That would be my dream for every one of them," Fleck said.