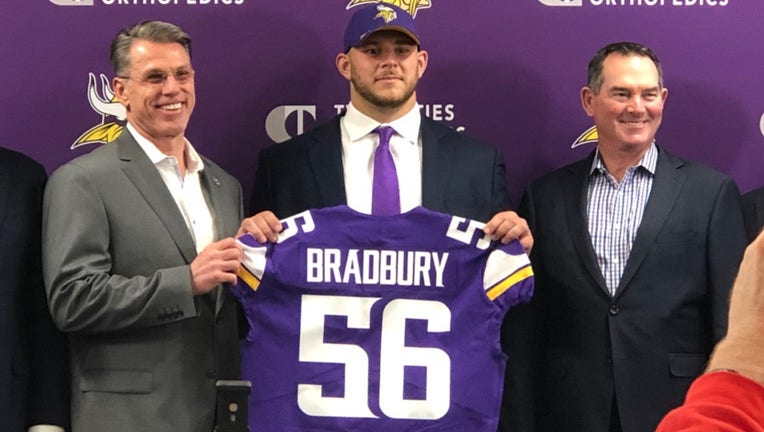 The Vikings drafted N.C. State center Garrett Bradbury with the No. 18 overall pick in the NFL Draft.

EAGAN, Minn. (FOX 9) - Garrett Bradbury is about five months into his NFL career, and his main focus is on taking things day by day. He won the Rimington Trophy as the best center in college football last year at N.C. State, was a finalist for the Outland Trophy, given to the best offensive lineman in college football.

The rookie got his first real taste of an NFL game day at U.S. Bank Stadium against the Atlanta Falcons. Bradbury had more than 30 friends and family on hand for his first NFL game.

He spent time during preparation for the Packers with Fox 9 Digital Sports Reporter Jeff Wald to talk about life as a rookie in the NFL.

Take me back to NFL Draft night. What was it like to get the call from Rick Spielman and share that moment with your family?

I mean it was a dream come true. It was awesome. It was good to be around a lot of friends and family that helped get me there. I mean it’s a goal I had had for a long time, it was a dream of mine. To see it come to fruition was a special moment.

How did playing center at N.C. State get you ready for the NFL?

I mean we had great coaches and we had great linemen around me. From that perspective, it was a little similar. Obviously it’s not the same game, the NFL is a lot different. I think N.C. State prepared me really well.

What did it mean to you to win the Rimington Trophy and be nominated for the Outland Trophy?

I think it was just a testament to, like I said, the coaches and teammates I had at N.C. State and the hard work that we put in as a team. I mean it’s a good individual award, but I wasn’t getting that award myself.

You graduated with a degree in business supply operations management. What do you hope to do with that after NFL life?

You know, I’m not sure. I’ll kind of figure that out. Hopefully I can play in the NFL as long as I can to be honest. I just wanted to get a business degree, that was my thing. That was kind of the concentration that kind of interested me at the time. That was a long time ago, I’m just kind of focused on football now.

After being drafted by the Vikings with the No. 18 pick, what was the first day at TCO Performance Center like?

It was awesome. I mean these facilities are unbelievable. You can see the owners and people around this organization care a lot about the Vikings. Obviously the city and the fans, there’s a lot of good energy and excitement, and it hasn’t really stopped since I’ve been here.

What’s the most stressful part of rookie life day-to-day in the NFL?

What was it like being out on the practice field for the first time in a Viking jersey?

It was unreal. I mean you can’t really describe it. I don’t really have a lot of words for it, it was just unreal. It was a blast and it was obviously a good Day 1 to get the win. It was exciting, it was emotional, it was awesome.

Pat Elflein moved from center to guard so you could be the starting center. What is your relationship with him like?

Pat is awesome. Pat is an unbelievable guy, unbelievable player. He’s been nothing but encouraging and supportive with me on the field, off the field. He’s a great friend. I look forward to playing with him for a long time.

The center/quarterback relationship is one of the most important in football. What is your relationship with Kirk Cousins like?

Kind of the same thing. Kirk’s a leader and you just kind of, I’m trying to follow his lead. Trying to see what he does in terms of preparation. He takes his stuff very seriously, I mean I have a lot of respect for him and the way he goes about his business. I just need to learn from him.

What has it been like to learn under offensive line coach Rick Dennison?

After two preseason home games, what was the Week 1 game day experience like at U.S. Bank Stadium?

It was unbelievable, I had a lot of friends and family in town. It was an awesome day. The crowd was amazing with all the SKOL chants and running out of the tunnel. You can’t really put into words what the feelings are. Definitely one I’ll never forget.

Now, Bradbury gets his first taste of the Vikings-Packers rivalry this Sunday at Lambeau Field.