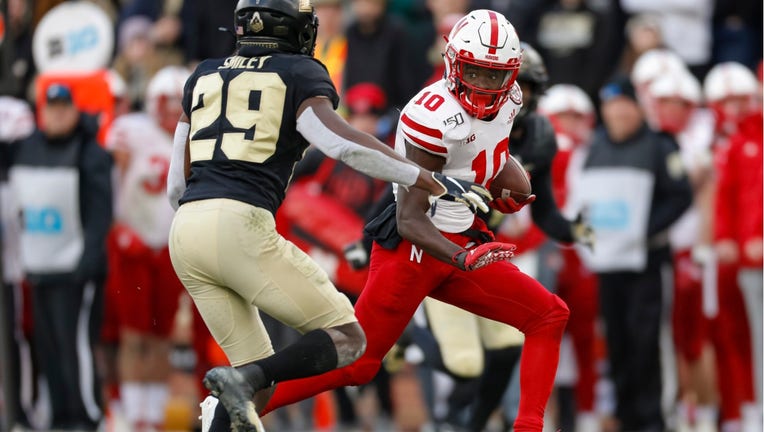 JD Spielman #10 of the Nebraska Cornhuskers runs the ball during the game against the Purdue Boilermakers at Ross-Ade Stadium on November 2, 2019 in West Lafayette, Indiana. ((Photo by Michael Hickey/Getty Images))

MINNEAPOLIS - JD Spielman was one of the top football recruits in Minnesota in 2015 when he announced his intent to play at Nebraska.

That officially came to an end on Monday, as Nebraska football web site HuskerOnline reported Spielman and the Cornhuskers “have mutually parted ways,” and he entered the transfer portal. Nebraska coach Scott Frost said back on March 2 that Spielman took a personal leave of absence from the program. At the time, Frost was expecting him back for summer workouts.

That was before the NCAA canceled all team sporting activities due to the Coronavirus pandemic.

He’s the only receiver in Nebraska history to record three straight 800-yard seasons. But it hasn’t translated to wins as the Cornhuskers have gone 13-23 in those three years, including 5-7 last season.

There’s a chance Spielman could spend next season at Minnesota. The Gophers have a hole to fill with Tyler Johnson graduated, but bringing back Rashod Bateman, Chris Autman-Bell and Demetrius Douglas as primary receiving threats. He's also close with former Gophers stars Carter Coughlin and Antoine Winfield Jr., who are now preparing for NFL careers.

Spielman is also a big weapon on special teams with kick and punt returns, and his speed and athleticism makes him difficult to tackle after making the catch.

Spielman’s dad is Minnesota Vikings General Manager Rick Spielman, and he’s been back in Eden Prairie since Covid-19 shut down Nebraska’s campus. JD Spielman was Minnesota’s Mr. Football in 2015, but originally committed to Ohio State to play lacrosse before getting high major interest in football.

If JD Spielman were to stay home and play for the Gophers, he would need a waiver to be immediately eligible. He hasn’t graduated and would otherwise have to sit out next season under current NCAA transfer rules. But the combination of moving home and playing for the home state school in the middle of a global health pandemic could increase his chances of getting a waiver for immediate eligibility.